The Hobbit: An Unexpected Journey (Review) 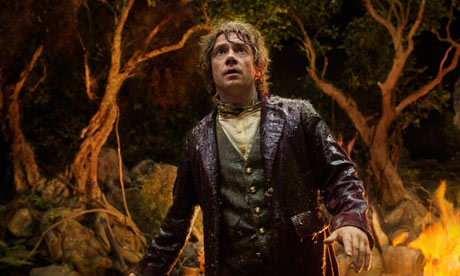 This past weekend, I had the most excellent opportunity to see the opening chapter of The Hobbit in 48fps 3D format. The Internet, of course, has been abuzz for the last few weeks in anticipation for this film, debating as much about the new High Frame Rate (HFR) format as the movie itself. I even made a preliminary post about it last week.

If you read my prior post, you’ll know I had some misgivings about the format. Now that I’ve actually seen it in action, I have more to say.

I’ll start out by saying that it does take a little while to adjust to watching a film in 48fps. However, I found that I quickly got used to the format itself, particularly because it makes 3D much, much better. I’m lukewarm on 3D filmmaking in general, mostly because I have to wear the 3D glasses over my own corrective lenses, and I usually wind up with eye strain by the end of a standard-length film. I had no such problem with The Hobbit. The action-smoothing effect of 48fps made the 3D much easier to enjoy. Other folks at the screening also experienced the same improvement, so it seems to not just be me.

There are issues with the look of the film, however, as it relates to either HFR or 3D.

The first issue, which I predicted earlier, is that HFR hides nothing. It’s very easy to tell the difference between CGI and real people. It’s very easy to see the seams in the actors’ makeup. Sometimes, the digital effects look distinctly half-baked. It’s often difficult to get past the fact that much of the film looks like a well-rendered video game and not an immersive cinematic world. This isn’t a problem with HFR itself; it’s a problem with how effects are used in the film. Since The Hobbit is the first grand forray into HFR, I imagine this film will teach effects teams quite a bit about how they need to change in order to use HFR in the future.

The second issue I have is with the lighting. Part of the reason The Hobbit looks like a video game is because it’s lit like one. The lighting is too uniform, too bright, and too candy-colored in the CGI scenes, so a lot of the giant effects set pieces just don’t look real. The cave in the “Riddles in the Dark” sequence is probably the brightest-lit cave I’ve ever seen. It looks like bluish daylight in there. I’m sure the brightness of all of the scenes is to compensate for the normal dimness of 3D, but it causes most of the scenes to have not one whit of atmosphere.

I was able to get past most of my misgivings in these departments by telling my brain early on that I was watching a particularly well-rendered CGI animated film instead of a live action film, so I was mostly able to get past the look of the film and absorb its other qualities.

In a nutshell, outside of the jarring difference of HFR 3D, the film is… okay.

The Hobbit suffers from some major pacing problems. It’s not slow, per se. It’s just rambling and episodic, and it doesn’t quite seem to know where its own climax might be. The inflation of the 300-page book into a grand trilogy is almost undeniably at fault here. Part of the reason the Lord of the Rings trilogy works so well (and particularly its first film) is because the Jackson/Walsh/Boyens writing team made a wise decision to focus tightly upon Frodo. If a scene in the book didn’t have anything to do with Frodo, it was cut. The theatrical cuts of the LotR films are incredibly efficient pieces of storytelling, despite their astounding running length. The Hobbit, on the other hand, is going in the opposite direction. For a movie named The Hobbit, it sure doesn’t seem have a whole lot to do with Bilbo Baggins. The movie tangents all over the place.

The episodic pacing is in part borrowed from the book (which is also episodic), but here it really feels like the walk-FIGHT-walk-FIGHT-walk-LEVELBOSS pacing of a video game (not helping the fact that the film also looks like a video game).

The net effect of all this is that the film ultimately feels like a three-hour boondoggle. Some individual scenes work quite well (most notably, “Riddles in the Dark” and a random bit where the characters run into stone giants), but the film just really rambles about. There are too many characters to really get intrigued about any of them. There are too many tangents to know what the audience is supposed to care about. There isn’t a whole lot of tension to be felt anywhere, except in a few random moments.

Which is too bad, really. If the movie hiding within the HFR 3D shininess and the rambling action pieces were better told, nobody would give a fart about the effects or the HFR. If this were a good movie with some awkward effects, it would be a joy despite its flaws. Instead, this is an okay movie buried under an avalanche of technology.

I do recommend seeing the film. It is quite the spectacle to see on the big screen, and it is entertaining despite its aimlessness.