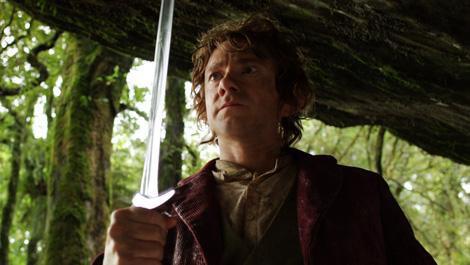 Unless you have been living in a cave, you probably know that Peter Jackson’s new mega-opus The Hobbit hits American screens very soon. You probably already know a couple other things about the project:

No, I have not already seen The Hobbit: An Unexpected Journey, though a few critics have already seen the film and their mixed reviews are starting to hit the Internet. I try not to hate upon a film I have not yet seen, and that is not my intent in this post. Instead, I just want to jot down a few thoughts I’ve been mulling over, here on the eve of viewing a shiny new piece of cinema technology.

That said, 48fps is a rather jarring leap of technology. If you are a passive filmgoer and you don’t really care about HFR and just want to see dwarfs and wizards and stuff, I hear that the 24fps conversion is pretty good. The conversion adds motion blur between the frames, so it should reduce the judder you normally see in digital-to-film conversions.

Why am I hedging my bets on 48fps? I’m usually all for new technology, and I haven’t even seen HFR in action. What gives? Here are my concerns:

In a nutshell, I don’t have anything in particular against HFR, but I suspect that putting HFR and The Hobbit together may be a poor marriage of story and format. A better introduction of HFR probably should have looked like the early introduction of IMAX filmmaking: documentaries tailored to be immersive experiences. Making The Hobbit into a massive trilogy was already a tall order; positioning it as the vanguard of a new cinematic technology may be one burden too many.

It’s doubly worrisome that this choice came out of Peter Jackson and Weta Studios, who in the past have made truly wise decisions in marrying low-tech with high-tech.

I’d love to see HFR work out. I think there is potential in the technology to make truly extraordinary cinematic experiences. I’d also love to see The Hobbit work out. I hope my concerns are for naught, and that I have a truly grand time watching the film.