Some time ago, Bill Stiteler urged me to look up this film on Netflix. The pitch: “It’s like a Frankie and Annette beach party movie, but it was made in East Germany!”

How could I resist?

Bill’s pitch is dead-on, both factually and descriptively. The plot of Hot Summer (aka Heisser Sommer) is as airy as cotton candy, featuring a herd of teen girls (who are probably actually in their late twenties) and a herd of teen boys (who are likewise suspiciously adult) who all go on a beach holiday on the Baltic coast. Fluffy songs and dance numbers ensue!

…as well as a trip to a collective farm!

It’s true. Someone in East Germany decided they wanted all the fun of a beach party movie, except without all those capitalist bits. Living behind the Iron Curtain was a blast for teens, right?

The film is more overtly a battle of the sexes than a piece of Communist propaganda, but there are definitely “how to be a good Communist” lessons sneaking in here and there. Mostly, the film just feels like it has the plot equivalent of a mentally challenged puppy. The weird delight of watching this film with our current historical perspective is seeing the film alternately grasping at Western entertainment values and Communist political values.

I’m not sure I’d call Hot Summer a good film, but it certainly is a unique film. If you’re the sort that enjoys digging into political subtext, this flick is a gold mine. And it’s a musical! Who doesn’t love beach party musical numbers? 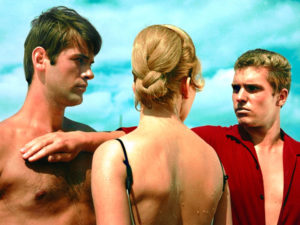 “You are NOT going to Godwin the post about the German beach movie! … DAMMIT!”