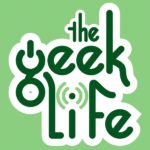 For the past 180+ episodes of The Geek Life, we have recorded our audio via Skype. Skype is a cheap way to get four people on one audio track without having to schedule putting them into an actual room together. Since we at The Geek Life are lazy at 8 PM on Tuesday nights, Skype was a fine solution for a long time.

Then, we started having problems with Skype. Or, rather, Skype started having issues with me. For whatever reason, when Paul would speak, my audio would drop. This has been going on for several weeks.

Thus, The Geek Life Episode 185 has not yet hit the audio streams, but it can be seen in its entirety on YouTube.  Want to watch me wander around my kitchen? Or see what sort of hatwear Paul uses to disguise his identity? Here you go.