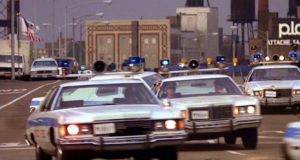 In lieu of an actual photo, I’ll approximate my experience with this image from The Blues Brothers.

On Christmas, I got to be witness to a crime. How was your holiday?

Fes Works and I were driving home on Christmas Day, fat and be-gifted from my dad’s family’s annual ice skating / brunch ritual. I was just about to turn left onto the side street that led to my apartment’s parking lot; I had paused, because there were two cars in the oncoming lanes of traffic. One was poised to turn left, but the other car behind it seemed to have plans to go straight, so I was waiting for it to pass.

The oncoming cars also paused at the intersection, because they saw something that I did not. A moment later, from my right…

VOOOM SQUEAL a dark blue/purple sedan came SCREAMING through the intersection, veering at a 45 degree angle and clearing my front bumper by what seemed to be inches. The car missed both going straight and turning left, and thus dove headlong through a street sign into the lawn of the Lutheran church across the street from my apartment. The car plowed through the snow and the lawn into the church’s parking lot and started heading around the building.

Immediately after, a few police squad cars dove through the intersection, using proper pavement to access the same parking lot.

I’m not sure what Fes or I said at that moment, but I don’t think it had proper syllables.

After I sure no more cops were going to barrel through the intersection, I cautiously turned left and into my apartment’s parking lot. As I did so, we saw the offending sedan veer perilously out of the church’s parking lot, miss the turn, and plow straight into a neighbor’s lawn/retaining wall.

A second after, a police cruiser purposefully plowed the sedan further into the retaining wall. The sedan’s days of destruction were over.

As Fes and I got out of my car, we found we had front row seats to the ensuing drama. Police cars continued to show up, until the tiny side street was completely choked with flashy-light vehicles. (Fes counted ten police cars and one sheriff car at one point.) The sedan’s driver was pulled out of the car by several officers. I was a block away, but the driver didn’t look injured, and it didn’t look like he put up a fight. He was soon cuffed and taken away in one of the various police cars.

After that, Fes and I walked over to the remaining cops.

“You’ll have to walk around!” one of them shouted.

“Actually, I was in the intersection when the car drove through. Do you need a statement?” I said.

“Oh! Yeah!” A young officer scrambled up to me with a pen and a pad of paper. His hands were shaking. “Wow, I’m still coming off the adrenaline high.”

Names and numbers were noted. I heard one of the officers say that the driver was drunk. Fes and I then went back to unpacking Christmas gifts and things from our car, while, one by one, the police officers eventually finished their business and went off to fight crime elsewhere.

Today, the only evidence of the car chase on my block is a mangled street sign and many wayward tire tracks. I don’t know what sort of havoc the driver created before he reached my end of town, but I don’t see any local news items about the chase, which I hope means that nobody got injured. I know that it was sheer luck of timing that prevented him from crashing into any of the three cars in the intersection. It was luck that he drove into a side street where all the houses were elevated above street level, or the car might have wound up in someone’s living room. I was luck of the weather that it was too cold for kids to play outside on this Christmas.

Thus, here’s hoping that the property damage I saw was the furthest extent of this crime. I’m thankful we all dodged what could have been a terrible catastrophe, and instead only have an exciting story to tell. As it is, it was really awesome to see a justice meted out in front of our eyes.

By the way, if you drink and drive, you’re an asshole.