Home Best of the Blog Tales from the Fish Store

Tales from the Fish Store

Once upon a time, I worked at a fish store.

Specifically, I was once a manager-on-duty and African cichlid expert for a shop that bred and sold pet fish. The shop wasn’t a run-of-the-mill mall-based pet shop. It was a place for aquarium super-nerds. We had about 30 employees on staff, with 6-7 working there at all times during the weekends, because the place would be elbow-to-elbow packed with customers. We worked our asses off there.

I worked there for many years. 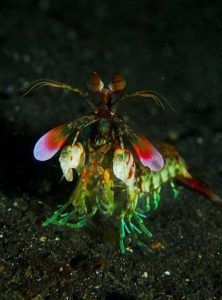 It was today’s post at The Oatmeal that got me thinking about the fish store today, because we got mantis shrimp in the store all the time. As noted in The Oatmeal’s strip, a mantis shrimp is a gorgeous creature that can smack the holy hell out of you. It can deliver 1,500 Newtons of force with its front legs, in a motion that causes water to boil by supercavitation. It can kill prey without even touching it. It can also easily shatter a glass tank.

We’d sometimes order the mantis shrimp deliberately from our suppliers. They’d come to the store very well packaged, and we would carefully place them in little acrylic tanks. Acrylic could withstand their abuse, as it is not prone to shatter. It might crack, but it wouldn’t shatter.

Sometimes, though, we’d accidentally get a mantis shrimp. They would hitch a ride on the organism-coated reef rock, which we would buy and sell by the pound. Every once in a while, an employee would be looking at our (glass) reef tanks and they would cry, “AAAAA MANTIS SHRIMP!”

And then we’d have to try to catch the shrimp — out of a tank full of rock-made hidey places, mind you — without pissing it off.

A lot of people think fish, as a whole, are pretty dumb. The old thought goes that goldfish have no memory, so the little plastic castle in their bowl is always shiny and new.

But, really, many species of fish are rather clever. Aggressive fish, like African cichlids, have extremely elaborate mating rituals and ways of guarding territory. You actually have to carefully plan out exactly which fish you will put together in a cichlid tank, otherwise they’ll just kill each other.

We once had a two-foot-long dragon wrasse in the shop, a gorgeous, deep green, flat-bodied saltwater fish. He was in a 75 gallon tank by himself because he insisted on redecorating. A lot. He’d drag pieces of coral around the tank with his teeth, rearranging them like furniture. Then he’d leave them alone for a while. Then he’d get bored and start redecorating again. If you were wearing the employee uniform and you weren’t paying attention to him, he’d spit small rocks a the front glass.

Around that time, we also had a golden dogface pufferfish. He was about the size of a football and extremely expensive, so he was in the store for many months before someone brought him home. We named him Sparky.

While Sparky was there, everyone loved him. It helped that the face of a dogface puffer looks like, well, a puppy. He also behaved like one. If he knew who you were (as in, he recognized you as one of the employees that fed him), he would press his snout against the glass and wiggle his tail so violently that water would slosh out of the tank.

One day, Sparky learned a new trick. I was across the room from his tank, facing away. At the time, I had waist-length hair, so I must have been easy for him to recognize. I was also known as a Feeder. I heard him sloshing around behind me, so I knew he was doing his excitement-dance. I was busy, though, so I didn’t turn around.

Well, this was apparently too much for Sparky. I suddenly felt a jet of water hit my back.

I jumped about a mile, and then turned around. Sparky was sucking in water and spitting it out of the tank at me.

After I recovered from surprise, I rewarded him with some squid meat. Because, really, how awesome is it to have a fish that is trained to spit at people?

One of the first pieces of advice we gave to new employees was: wear rubber-soled shoes.

There were hundreds of tanks in the store, all of them containing electrical widgets like filters and pumps and heaters. Under such heavy and prolonged use, many of those electrical widgets eventually got a little ornery. If you forgot and wore non-rubber sandals, you’d reach into a tank and get a honey of a zap.

Winter Saturdays at the store were gruelling. It was the busiest day of our week, and because everyone in Minnesota had cabin fever, customers would flood the tropical-themed store.

We’d also get saltwater fish shipments in that day. Stacks of styrofoam coolers would arrive by plane, and then someone would pick up the boxes at the airport, and then we’d have to acclimate and stock the fish in tanks while also helping wall-to-wall customers. It was madness.

One of the suppliers would occasionally send us “extra” stuff. We were a big customer, so when they’d find something extra cool in their traps or nets, they’d send it along as a bonus. Sometimes, I don’t think they even knew what they were sending us.

Actually, I know that for a fact.

Because one Saturday, we got one of these. 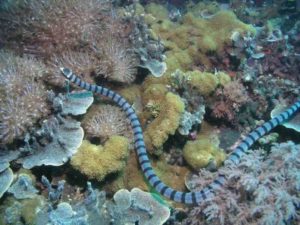 From the Wikimedia Commons

We were putting fish away as fast as possible, so we didn’t look well at what we had in that bag. At a glance, it looked like an eel, so we put it in the eel tanks, which were down low, with open tops around waist level. After a bit of acclimation time, we sliced the bag open and set the animal loose in the tank.

A little while later, one of the employees asked, “Uh, does that look right?”

It wasn’t swimming like an eel. It also had nostrils.

We called the zoo and managed to get hold of a herpetologist. The herpetologist ran through an identification tree with us and…

(keep in mind that the store was packed with customers)

…identified the creature as a Belcher’s Sea Snake.

For those of you not immediately recoiling in horror, I’ll fill you in. The Belcher’s Sea Snake is the most poisonous snake in the world. It is 100 times more lethal than a Taipan. It isn’t an aggressive animal, so it isn’t considered particularly dangerous, but a milligram of its venom can kill a ridiculous amount of human beings.

And we had one in the store.

In open-topped tanks with tops at about the eye level of children.

We asked the zoo if they wanted the snake. The guy said, “No, it’s too dangerous. But I might want it for my personal collection…” Seeing the word “lawsuit” writ large, the employee on the phone said, no, we’ll take it from here.

Sadly for the poor snake, there was only one option from there. We were in a country that was very far from anyplace that would reasonably have antivenom for a Southeast Asian sea snake, and we couldn’t risk injuring anyone. The snake was very carefully removed from the tank, and then set outdoors in a bucket of water. The January weather took care of the rest, by cooling the reptile’s blood until it hibernated, then died.

The poor thing was scooped out of the ocean, packed in a box, flown halfway across the world, and then killed unceremoniously in a very cold parking lot.

The holiday party every year involved the owner of the store taking all the employees out for an enormous sushi dinner, followed by bowling. I remember a tradition of the sushi dinner involved specifically eating fish that you had kept as a pet in a tank.

We’d never sell live octopus in the store. Before I was employed at the shop, they attempted selling octopus. The creatures were hell to deal with. They’d never stay in their tank. They’d go roaming around the shop. They’d crawl into other tanks and eat the fish there. Never again.

But the shop also had a maintenance division, which means we had a few folks who would care for professional-sized tanks in restaurants, offices, and private homes. One of the maintenance division’s customers had a live octopus. That octopus was amazing. The customer would put food in a screw-top jar, screw on the top, and place the jar in the tank. The octopus would then unscrew the cap, eat the food, and then put the cap back on.

For the longest time, I’d tell this story to people, and they’d stare at me in disbelief. I am so glad I live in a world with YouTube now, because I can now show you that octopi loooooove screw-top jars.