The Intouchables and Racial Tropes 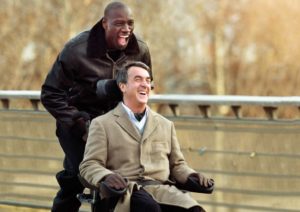 It was inevitable. Even though the story looked like a retread of a dozen tried-and-true tropes, the film took Europe by storm. It was the most successful film in Germany for the year of 2012. It became the second most successful film ever in France. And France submitted it to consideration for the Best Foreign Language Film Oscar.

So, even though I was bitter that Holy Motors didn’t vie for the Oscar instead, I was pretty much required to watch The Intouchables.

In a nutshell: The Intouchables is the (based on a true) story of a rich white invalid who hires a sassy urban black man to be his personal assistant. After some trying times, they learn things about life from each other!

You may already know what my brain reeled about when I first heard about the film. It sounds like this film is pulling so hard for awards that it layered trope upon trope to get there. Magical Black Man? White Savior Syndrome? Magical Differently-Abled Person? Rich Person Bored Silly? All present!

And yes, the actual movie has all this in spades. In fact, it plays like a movie that was made in a country that never had its own Driving Miss Daisy to learn from.

But here’s the thing: it really is a true story. The moments of the film where I would most likely cry foul were actually what really happened. The black man in the film is an Arabic man in real life, but all of the other broad strokes are unchanged.

Thus, I have questions:

1) Would it have been a better film if the script had made additional changes to go in more surprising directions, and not tread upon well-worn cliches, even though that’s what actually happened? Does art have more of a responsibility to reflect the world as it exists, or to push the world in new directions?

2) Why was a real-life Arabic man changed to a black man for the film? Was it deliberately done to exaggerate racial differences? Is it more acceptable in France to have a black lead instead of an Arabic lead? Was actor Omar Sy simply the best actor for the role, so they wrote the role around him?

3) How would this movie had changed if the black man were the rich man in the wheelchair, and the poor white guy was his caretaker? What if the script were exactly the same? Is this film really just about classism, or is race a genuine factor?

4) Do I need more beer and popcorn?

I don’t have real answers to any of these questions, except perhaps #4.

Ultimately, for all of the film’s go-for-all-the-awards hallmarks, it didn’t make the cut for Oscar nomination. Either that means that the Academy said, “We’ve seen Driving Miss Daisy before,” or they were as bitter about the Holy Motors snub as I am.

P.S. — All that said, though, The Intouchables is a pretty okay film overall. I have to admit, the two lead actors (Francois Cluzet and Omar Sy) have an amazing amount of chemistry together.