The Saturday of Ebertfest was the last of the “big” days, which included three films: Higher Ground, Patang, and Take Shelter. After that, only one film remained unseen during the festival, so this was the day that Ebertfesters made their last big gatherings. Between Patang and Take Shelter, I wound up at a very cramped Tweet-up at Guido’s with folks like @smithward2, @ebertfest, @foodiacsceo, @sircritic, and a few others whose aliases I now cannot recall. Up to that dinner, I’d been mostly in stealth mode at Ebertfest, as the only folks I really knew in the Ebertfest crowd were Mirko (the buddy I was staying with) and critic Steve Prokopy (who I know from years and years of Butt-Numb-a-Thon).

After that day’s films, Mirko indulged my need for diner food by joining me at Merry Ann’s Diner, a 24-hour joint known for their “hangover horseshoe”, a pile of carbs and meat that defies description, reasonableness, and possibly health codes. Anyway, they provided me with this… I love you, Chambana.

Anyway, onward to the movies…

I consider myself to be pretty much a film omnivore. I watch howlingly-bad Z-grade horror films as happily as I watch the snootiest of art films. I’ll watch westerns and sci-fi and touching drama and kid’s films and documentaries and Bollywood and sports films… Really, my only criteria is that the film doesn’t bore me, and I have a tremendous amount of patience. I can find relevance in just about anything, thanks to years of art history training.

Every once in a while, though, I’ll stumble across a film that is so vastly outside of my personal experience I feel completely ungrounded in saying anything about it. Most Wes Anderson films fall inside this category, because the characters seem like aliens to me. Are they well-made films? Certainly. But I have a hard time sitting through them, because I completely don’t get what makes the characters tick.

Higher Ground is an alien territory movie to me. The film centers on a deeply religious wife and mother, who starts looking to redefine her faith in God.

I was raised un-religious. I don’t say “raised atheist” because that doesn’t give the right idea. My parents never told me “there is no God” or anything like that. The concept of any sort of deity was just not there. At all. Growing up, I only had the vaguest notion of what religion was about. It simply wasn’t present in my life. I don’t think I walked into a church for a purpose other than a wedding or a funeral until sometime in my teen years. To me, religion was (and still is) this weird, cultish thing that other people did.

Thus, the whole crux of Higher Ground just isn’t within my dataset. I feel like I shouldn’t even be reviewing this film, because I am so far outside this film’s key audience that I’m not even on a visible horizon. Then again, maybe I’m a great pair of outside eyes.

As a piece of cinema, Higher Ground has a lot going for it. It is deftly directed, beautifully lensed, and well acted. The script (based on the memoirs of Carolyn Briggs) is cleverly written enough that even I got some good giggles at the lighter moments. The characters are rich, interesting, and charming, and they are always treated in the script with intelligence and respect. For as much alien territory as this film was covering, I must say I was never bored.

It never really touched a nerve with me, but there are others in the audience who were very taken with the film.

I don’t have much else to say about it, except that it’s always nice to see a film that wasn’t just female-centric, but was also written and directed by women.

The Q&A after the movie featured Carolyn Briggs, who was funny and charming. I was struck by something she said, which is something we both can apparently agree upon: “It’s a beautiful thing to learn to love the questions.” Patang (which translates to “Kite” in English) is one of those labor-of-love films that took seven years and a lot of work to make. The film focuses upon the interactions amidst an Indian family in Ahmedabad during the Kite Festival.

I can’t say a whole lot more about the plot, because that’s really about all that happens. Family members argue, make peace, reminisce, and fly kites. It plays like a Woody Allen film with less detail. It plays like home movies that feature a family you don’t know.

The nice thing is that the characters don’t feel like stock characters. The actors are so genuine that Patang almost feels like a documentary. However, the storytelling is so detached that you come out of the film feeling like you didn’t really learn much about anyone.

I may be in the minority on this one, as I know a lot of other folks in the theater loved the movie. However, when I talked to a couple of people who liked the film, they both admitted that they nodded off a couple of times during the movie. I did, too. While I didn’t find Patang outright boring, I just couldn’t get into it.

The film is worth a watch, though, for the visuals alone. Patang is beautifully filmed. I’m thankful I saw it in a theater with a big, beautiful screen. If you are able to look at the film like a long, pretty poem that happens to have people in it, you may get more out of it than I did.

(An aside: big kudos to director Prashant Bhargava, who suddenly had to entertain the audience when the film had to be turned off, re-matted, and re-started during the first five minutes. He busted one hell of a freestyle rap for us! Wow.) 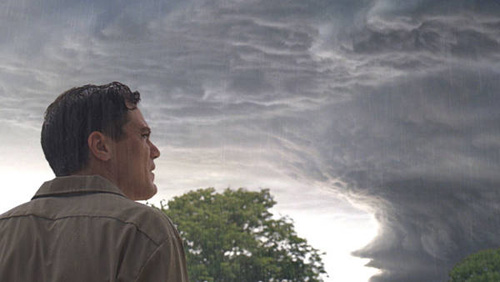 The first note I wrote after the Take Shelter screening was, simply, “DUDE.” After seeing two other films that tried hard yet didn’t sweep me off my feet, it was exhilarating to end the night with a film that really hit home.

Take Shelter is the story of a blue-collar man who, one day, starts seeing apocalyptic storms forming in the sky. The clouds gather, tornadoes form, and something that isn’t water falls from the sky. However, it seems that he’s the only person who sees these phenomena.

As his visions and terror worsen, we learn that his family has a history of mental illness. The film focuses tightly upon his struggle to identify reality, manage his fears, and get medical help.

Take Shelter could easily have been a straightforward drama of a family dealing with mental illness, but director Jeff Nichols films it completely through the eyes of the protagonist, an unreliable narrator, and thus the film turns into an almost Hitchcockian thriller. I’m reminded of the tone and quality of the early M. Night Shalayaman films (you know, the good ones).

Actor Michael Shannon delivers a magnificent performance as the vision-struck man. None of this would have worked without him at the center. There was talk earlier this year that he should have been nominated for a 2011 Best Actor Oscar, and I’m now shocked that he didn’t even get a nomination.

This film is a helluva thing. It’s also easily available on DVD and Blu-Ray. Go find it and watch it.

Also, if you ever, ever get a chance to see Jeff Nichols and/or Michael Shannon speak live, drop everything and go. These guys are a hoot and a half. In fact, you can see their Ebertfest Q&A right here (but don’t watch it until you’ve seen Take Shelter)!