Greetings once again from Ebertfest! A view from the balcony of the beautiful Virginia Theatre.

Day 2 was slightly wonky. This was planned to be the Day of Patton Oswalt, as he had been scheduled to do a Q&A after the screening of Big Fan, and then he was going to present Kind Hearts and Coronets at the close of the night. Sadly, Oswalt’s was detained in New York when his current film had to reschedule a shooting day due to rain. Big Fan was to be Oswalt-less, and Kind Hearts and Coronets was cancelled altogether. Attendees were disappointed, but I don’t think anyone was as disappointed as Patton Oswalt himself.

Yet we pressed on! Film notes and photos behind the cut. 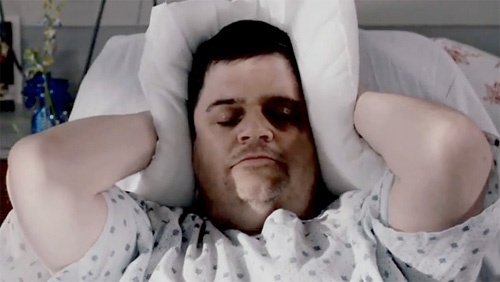 Big Fan is the story of a die-hard New York Giants fan. To an outside observer, it looks like this man has a sorry life: he works at a parking garage, he lives with his overbearing mother, he has one friend, he has no other hobbies aside from calling in to a sports radio show on a regular basis.

One night, he and his buddy spot their favorite player at a gas station. They follow the player into a high-end Manhattan club, just for the chance to meet the man. But when they approach, the awkward conversation goes wrong enough that the athlete beats Oswalt’s character until he lands in a hospital.

The film then tackles some fascinating issues. The fan loves the Giants so much that he wants nothing to do with efforts to prosecute the quarterback. Yet everyone around him wants to pursue vengeance, turning his life upside down. All he wants is to heal up and go back to his simple, yet happy, life.

The film is fascinating little drama, and will appeal even to people who have no interest in sports. I think we all know at least one superfan of some sort, and we can recognize that person in Oswalt’s character. As director Robert Siegel mentioned in the Q&A after the movie, Oswalt himself knows nothing about sports, and yet he was more than familiar with fandom. “The fuel is different, but the fire is the same.” The fuel could be baseball, Star Trek, stamp collecting, or politics. I admit, I watched parts of this film through my fingers, because, wow, do I ever know the person that Oswalt portrays. I know that person a hundred times over.

Oswalt is perfect in his role. He carries the film with great sympathy.

The film is available for disc rental on Netflix. I recommend picking it up. Shot for $250,000 and on a 16-day shooting schedule, Kinyarwanda is a true labor of passion. This is a film that shoots for the moon when it comes to making an impact upon human understanding, and it hits pretty well. These are folks who want to make a difference, and they are doing so without ego or self-consciousness. They are simply telling real stories.

Kinyarwanda, stylistically, has a lot in common with Reservoir Dogs and Amores Perros. Set during the Rwandan genocide, Kinyarwanda strings together several tales. This could be a series of short films, but instead the movie weaves the tales together, so that they cross occasionally at different angles. We see scenes play out multiple times from different viewpoints, often out of chronological order. The result is a kaleidoscopic view of an ugly situation, one that delves into each of the characters in turn.

The film is deft with its drama. It’s not shy about humanizing characters that would be considered villains in a lesser movie. The point of the movie, in fact, is to forgive. This is not a film about punishment, or about appealing for sympathy in a world that mostly ignored the fact that Rwandans slaughtered millions of their own people. This is a film that attempts to document and understand what happened at the most basic level, from the very ground where neighbors were simply interacting with neighbors. This is a film that emphasizes that, after everything was over, it was important to forgive rather than punish, because the Rwandans needed everyone to rebuild their country.

There are a few moments in Kinyarwanda that seem ham-handed, clumsy, or blunt, but they are few and far between. Mostly, this is a film that is honest and solemn.

Kinyarwanda is also available from Netflix via DVD. The third Ebertfest film of the night was Terri (2011), but I’d stuffed myself silly with Mongolian barbecue and I didn’t feel like sitting in a theater anymore. Thus, my host (Mirko) and I decided instead to make our own Kind Hearts and Coronets viewing party. This was how I was introduced to That’s Rentertainment, which may be the greatest video rental store in existence. Chambana locals might be interested to know that That’s Rentertainment currently has an entire Ebertfest section of the store, where you can rent films from previous Ebertfest lineups. Neat!

For those of you who have never seen Kind Hearts and Coronets, I will simply say that it is delightful, and give you a photo of Alec Guinness in drag: 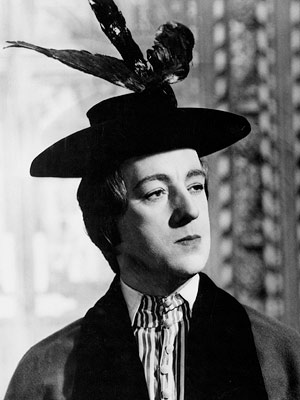 Mr. Guinness plays eight different roles in the film, to great comedy. If that doesn’t convince you to see this film, you are dead to me.