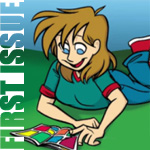 Over the last few days, Fes and I have been receiving worrisome news about Marcus, our cohost on the First Issue video series. He had been hospitalized for several days with internal bleeding, and yesterday, he learned that he had colon cancer.

This is dreadful news that nobody wants to hear, but it’s made all the more dreadful by the fact that he’s unreasonably young for this sort of thing. As in, he’s about a decade younger than me, still in his 20’s. Understandably, he’s a bit freaked out by it. We all are.

The good news is that his prognosis is good: at last update, it looked like the cancer had not spread into his liver or lungs. There were a couple odd spots that the doctors could not yet identify, but if they’re not cancerous, he won’t need chemotherapy. It also sounds like the tumor will be relatively easy to remove. From what I hear, colon cancer is highly treatable if found early, so it sounds like he may have hit the more pleasant end of the unfortunate cancer lottery.

At last update, it sounded like he’d be going into surgery this morning or afternoon. We are all hoping for the best.

If you would like to send him your well-wishes, you may post them here, and I’ll forward them on. Alternately, you can send a get well card to Fes’ PO box, and we will route them to Marcus: