More Tales from the Fish Store

My previous post about working at the fish store received a lot of comments to effect of, “More!”

So here you go.

Aquariums that contain saltwater reef creatures, such as corals and sponges, require a lot of light. In fact, they require the sort of broad-spectrum light that you usually only get from sunlight. You don’t get that sort of light from a standard light bulb. You can only buy lights that give off enough of the proper light from specialized locations: high-end aquarium stores, specialist gardening shops, etc. Usually these lights, and their fixtures, are fairly large and expensive.

We had several such fixtures at the store, but there was one that was something of a show piece. On the outside, it was a four-foot-long box of attractive polished wood. The inside contained two large halogen light bulbs, each about a foot long, shining downward into a large reef tank below. The box hovered several feet above the tank, hung from heavy-duty chains from the ceiling.

The shop I worked at was a place that started as a single room in the 1960s, and then eventually bought all of the other tiny storefronts in its building. On the outside, the shop looks like a little two-story shack with a garage behind it. On the inside, it’s a maze of rooms, filled with hundreds of tanks. Many people are visibly startled when the walk in, because it really does look bigger on the inside. Since there were only two doors to the outside (the front door and the back door) and no windows, most of the rooms were isolated; you had to climb through other rooms to get to them. All paths converged at the front room’s registers, which were crammed into the middle of a space just barely large enough to house them.

The shop was usually insanely busy, too, especially on the weekends. On a Saturday, we’d have 5-8 employees on staff, and about fifty customers crammed into the store.

The reef tank I was describing above sat in one of the back rooms, with no direct access to the outside world.

And one busy Saturday, in the middle of the day, the light fixture above it vanished.

The thief would have had to:

a. cut a large, heavy, wooden piece of furniture away from the chains that suspended it from the ceiling.

b. unplug the box, whose plug ran underneath one of the other tanks.

c. carry the box, without dropping it or burning the hell out of their arms on the scalding-hot halogen light bulbs.

d. smuggle the box past customers and employees, who were packed elbow-to-elbow in the main room.

To this day, I have no idea how it was accomplished. It was a goddamned heist. To steal a lamp.

And I bet it was stolen by someone who wanted to grow their own weed. 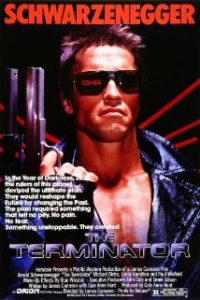 Did he just want a pet?

The fish shop’s name incorporated the word “fish”. In fact, it contained the names of no other animals. Only fish. The name strongly implies that all we sold was fish. (Technically, we sold many non-fish animals — clams, crabs, snails, etc. — but the aquatic angle was key.)

The shop did appear in the phone book under the category of “pet store”, though, so we occasionally would get phone calls from people looking for puppies and whatnot.

Me: “Hello, thank you for calling [name of fish store].”

Customer (who sounded exactly like the goddamned Terminator): “DO YOU HAVE GREEN IGUANA.” Yes, this was spoken like a statement.

To this day, I keep wondering if the Terminator showed up at other pet stores, seeking lizards named Sarah Connor.

On occasion, the store would receive shipments of soap dish crabs (Cardisoma armatum) and Sally Lightfoot crabs (Grapsus grapsus). We would store them in little individual cubical tanks, because if we put them in tanks with fish, the fish would occasionally vanish. These crabs would come in at a size somewhere between salad-plate and dinner-plate, so those claws were formidable.

The problem with the little individual tanks was that they were pretty shallow. It was easy for the larger crabs to get a foothold on the top edge of the tank.

Thus, every so often, I would be helping a customer when I’d see, out of the corner of my eye, a crab scrambling for freedom across the shop floor. Then some unlucky employee would have to dash after it, chase it under store displays and aquariums and through webs of power cords, and then somehow catch it in-hand without having a finger pinched.

And oh, those little bastards could pinch.

Many, many years later, I found myself on a cruise ship in the Galapagos Islands. The islands of the Galapagos each have a population of Sally Lightfoot crabs, so those colorful little critters were everywhere, basking on the shores. When we’d use the Zodiac boats to shuttle between the cruise ship and the islands, we’d often land right in the middle of Sally Lightfoot-land.

One night, I was having dinner on the deck of the cruise ship, and out of the corner of my eye, I saw a Sally Lightfoot crab scuttling across the floor like it were being chased by Godzilla. The crabby stowaway had probably grabbed onto one of the Zodiacs and followed it back to the ship.

I caught the attention of one of the ship’s crew members and told them that there was a wayward crab aboard, but nobody who worked for the ship was willing to go after the little beast.

So, that’s how I, armed with a dinner plate and a napkin, wound up chasing a Sally Lightfoot crab around the deck of a cruise ship one fine night.