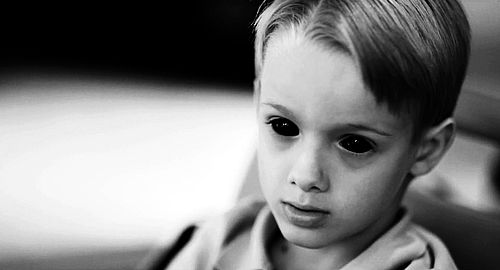 Escape from Tomorrow is a film I literally thought I’d never get to see. Shot entirely at Disney theme parks without permission, this black-and-white fantasy-horror-comedy might never reach distribution before being squashed like a bug under the heels of Disney’s lawyers. However, it was the rage at Sundance a few months ago, and I was lucky that Roger Ebert managed to book it for Ebertfest before he passed away.

The film follows the story of Jim, a husband and father of two, who travels with his family to the unnamed-yet-obvious Disney World. While there, he loses his job, and then slowly descends into the same sort of middle-aged-American-male self-involvement fantasy/horror world explored in films like David Lynch’s Eraserhead. Jim starts seeing his children and wife as demon obstacles. He fantasizes about two French teen girls, which he begins to stalk around the park. The dolls at the thinly-disgused It’s a Small World ride (from which the movie blissfully excises the music) leer at Jim with evil eyes. He starts seeing conspiracies and horrors in every corner, all steeped in corrupt sexuality and disease.

The film is entirely about adult male anxiety and the corruption of the American dream. Really, Disney is the perfect setting for the film. After seeing Escape from Tomorrow, I fully understand why they went through the risks and trouble to film there.

The film is definitely low-budget, often amateur, and far from perfect. Some of the green-screen work is cringe-worthy. The acting sometimes feels stilted. The pacing is awkward at times. Sometimes, the symbolism (and oh, there is much symbolism) seems half-baked. Sometimes, it feels like the film doesn’t quite know where it wants to go.

However, much of this is overwhelmed by the sheer audacity of the movie. Escape from Tomorrow is the sort of film that plunges into the deep end and swims like a motherf*cker. This is a movie that may not be entirely graceful, but it’s absolutely fearless. This is a film that is unafraid to look ridiculous. And I guarantee you, you’ve never seen anything quite like it.

But that still leaves the question of whether you’ll ever be able to see it. It does look like the filmmakers are working to make the film releasable. The film uses no Disney material aside from the visuals of the theme parks. (The music is all original, and no direct mention is made of Disney properties.) The cut of the film I saw at Ebertfest was 14 minutes shorter than the one screened at Sundance. There are currently scenes that have parts of the screen obviously blacked out to cover text or logos, and there was at least one point where a certain D-name was bleeped out (to great comedic effect). I also heard word from a professional critic at Ebertfest that they could conceivably pull it off.

So here’s hoping I can make “cat flu” jokes at you guys sometime in the future. Escape from Tomorrow Q&A at Ebertfest. Director Randy Moore is in the middle, speaking into the mic. To the right are cast members Roy Abramsohn, Elena Schuber, and Annet Mahendru. To the left is editor Randy Moore Director
Soojin Chung.