Home Best of the Blog Censorship and Holy Motors

There are few times when Twitter has brought me from higher highs to lower lows in under 280 characters.

I love Holy Motors. Holy Motors is one of the greatest films that crossed my weary retinas in the last year. I’ve only seen it once so far, but I’ve been itching to show it to others. It’s funny, elegant, smart, baffling, arch, sincere, and unique. There are moments in that film that are destined to be iconic, the stuff of cinema legend.

So I was thrilled when I saw “Holy Motors” and “Netflix Streaming” in the same sentence. I was hoping to leap online and post, “GO WATCH THIS NOW, YOU HEATHENS!”

But sadly, I cannot fully recommend the cut seen on Netflix Streaming. Here’s why: 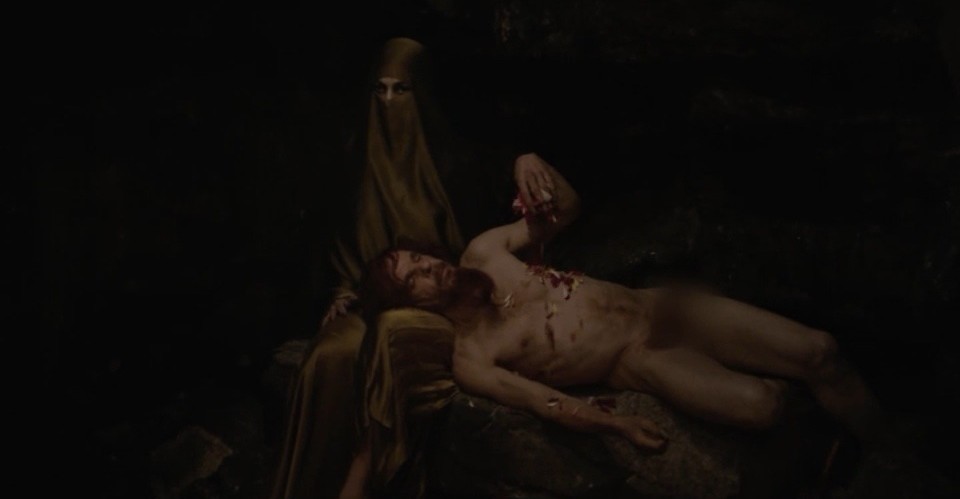 That’s not what I saw in the theater. In the original version of the film, Denis Lavant sports a rather impressive erect penis in that shot.

To the censor’s credit, the scene itself is intact. It’s just that the offending member has been blurred out, making it look like Denis Lavant is sporting a very fluffy merkin. It’s also possible that the light in the scene has been dimmed in order to cover the fact that a portion of the screen has been blurred. (I recall the lighting being somewhat brighter in the theater.)

Does the exclusion of a prominent erection alter the scene itself? Undeniably. The scene includes a number of subversions of religious images, which includes altering Eva Mendes’ dress into a burka as well as the in-your-face sexual angle of Lavant’s wang standing at attention. The scene plays out without dialogue, so it relies entirely upon the imagery. Covering up the wiener definitely removes meaning from the scene.

A quick search on the Internet reveals that all streaming copies of Holy Motors are censored in this way. Amazon, iTunes, Netflix Streaming, VOD… all are sausage-free. The Blu-Ray and DVD are thankfully untouched. Why?

Well, according to Very Aware, it seems that the distributor opted to blur Lavant’s member in order to dodge obscenity laws in all constituencies that might stream the film. However, as that article points out, that didn’t seem to stop films like Lars Von Trier’s Antichrist from showing not only erect penis, but also full-on penetration on the same streaming services.

A few weeks ago, I brought up the Hays Code around a friend who, despite being fairly well versed in pop culture, had no idea that it ever existed.

The Motion Picture Production Code, aka the Hays Code, existed from the early 1930s until 1968, when it was abandoned and replaced with the MPAA film rating system that we know today. The Hays Code was a censorship code that standardized what could and could not be seen in a motion picture made in the United States. The Code banned things like drug use, nudity, swearing, white slavery, miscegenation, venereal diseases, ridicule of religion, and various acts of violence. The Hays Code is the reason Alfred Hitchcock spent decades trying to sneak the image of a toilet into one of his films; he finally succeeded in Psycho, but only by making the toilet part of the plot.

I’ve been present when film watchers are shocked when they see nudity or frank sexuality in a silent era film. Because of the Hays Code, most Americans think that people were squeaky-clean prior to the mid-1960s, that the Vietnam era was the birth of all sex, drugs, and swearing. The truth is that folks in the 1920s talked about and experienced the same basic things we do today. It’s just that our popular culture was in lockdown for over thirty years, so there isn’t much cinematic evidence of such things prior to the MPAA. Yes, you see those subjects covered in foreign films made during the Hays Code era, but foreign films weren’t easily accessible to Average Joe American until very recently.

While the MPAA rating system isn’t all wine and roses (see This Film Is Not Yet Rated for reasons why), it is a definite improvement over industry-wide censorship. I’m fine with putting a few hurdles in front of taboo material, as long as it’s still available.

Thus, it is good that Holy Motors is uncensored on Blu-Ray and DVD. However, I’m still baffled and angry that some penises are apparently more obscene than others on streaming video channels.

In Minneapolis every month, there is a stage comedy show called Vilification Tennis. The whole premise of the show is that performers stand up and insult each other in a tennis-style game. “Yo mamma” jokes abound.

The show is notorious for being incredibly offensive. The performers are very clear that offensiveness is the goal, and that even the most laid-back individual will probably be offended by something in the show. The point of the show is, however, that nothing is off the table. Jokes about pedophilia, religion, race, sexism, and even rape… all are present.

And, honestly, it works. The show is funny. It’s not for everyone, that’s for sure, but they do manage to make it work.

Since this is the age of “rape jokes are never funny,” I once asked the ringleader, Tim Wick, how they managed to make the show work.

He responded that it works because nothing is taboo at the show. The moment you ban one subject from humor is the moment you suggest that everything else is okay. Banning pedophilia jokes would imply that rape jokes are somehow okay in polite society. It’s a tricky tightrope to walk upon, but they’re professionals and have been doing the show for years.

…which brings me back to Denis Lavant’s penis.

What does it say about us as a society when I can turn on Netflix Streaming and watch female nudity galore, but a single erect penis (which isn’t even doing anything aside from standing around) is verboten?

Why can I watch thousands of people being slaughtered graphically on a movie streaming service — via guns, zombies, aliens, and all manner of mechanical failure — while one penis is apparently too much to handle?

Or, to bring this to the stupidest level, why can I go to Netflix Streaming and see Willem Dafoe’s penis but not Denis Lavant’s penis?

Really, it’s a shame. Holy Motors is an amazing film and shouldn’t be fucked with.

And Denis Lavant’s penis is rather nice. Pity that you might miss it.