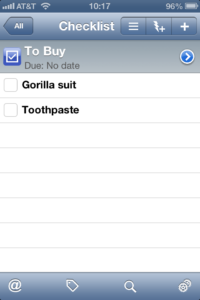 This is an actual screenshot from my phone.

Last week, I completed the annual American spring ritual of doing my taxes. This year, I’m fortunate enough to have some money coming back in refunds. It’s not a huge amount of money in the grand scheme of things, but it’s enough to do some responsible things, as well as do something thoroughly irresponsible.

I have decided that the greatest possible irresponsible thing to do with my newfound wealth is to buy a gorilla suit.

“But why a gorilla suit?” I hear a few of you ask.

My other reply is, who wouldn’t want a gorilla suit?

Seriously. If someone gave you a gorilla suit, you’d use it all the time, wouldn’t you? I’m definitely going to get my money’s worth out of my gorilla suit.

Think of all the things I could do with a gorilla suit:

Really, the possibilities are endless.