On August 30th, I was in the process of driving from Minneapolis, MN to Atlanta, GA, a trek I now take once per year. At a point just over halfway between the two cities is a town named Effingham, IL, and it was about here that I wanted to take a break.

When I stopped, I found out from Roadside America (which has a great iPhone app) that I was near My Garage Museum. I’m a little bit of a gearhead, and I love classic car museums, so I figured this would be a great opportunity to strech my legs and take a couple photos. Bonus: free admission!

What I didn’t expect to find was this: 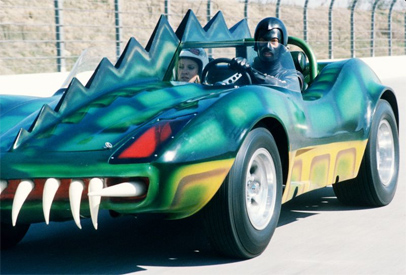 Comparing between the movie and the actual car, there are differences, particularly in the teeth. However, it does look like the car in Effingham is the real deal, so the car must have gone through a polish sometime since 1975.

According to the museum’s web site, the car “…designed by James Powers and constructed by Dean Jefferies, features the unusual combination of a Volkswagen chassis, Corvair air-cooled power plant, and Corvette style body.” It sure is pretty. The museum also contains a lovely Corvette swag shop, a couple dozen classic Corvettes, and no less than THREE movie-used Herbie the Love Bugs. But the Death Race 2000 car takes the cake.