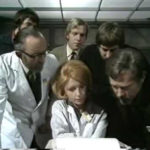 On the 5th and final day of Ebertfest, only one film was scheduled: the legendary Citizen Kane.

Don’t get me wrong. I love Citizen Kane. But they weren’t playing Citizen Kane straight up. They were playing it with Roger Ebert’s commentary track.

Don’t get me wrong. I love Ebert’s Citizen Kane commentary track, too. In fact, I own two different copies of it. But when faced with the choice between a) watching a movie (which I’ve already seen in a theater) with a commentary track on (which I’ve already heard and own), or b) spending the afternoon seeing friends in Chicago, I’m going to choose the path less traveled.

Thus, I bid an early adieu to Ebertfest, and drove to Chicago to meet Kenneth Hite for lunch. This is how I wound up watching The Stone Tape instead of Citizen Kane.

Ken and his wife, Sheila, are people with vast appetites for media. I know a lot of people who own terrifying amounts of books, but Ken and Sheila win the “Most Mind-Bogglingly Huge Personal Book Collection” award. I don’t think there’s a single wall in their house without a bookcase upon it… and that’s on top of the entire floor of the house that contains nothing except packed bookshelves. Did I mention that it’s all cool stuff, too?

Anyway, they also have a rather fascinating collection of movies. Since Ken and I were killing some time (we were hoping Sheila would be done with a 24-hour knit-a-thon before we went out for excellent Asian barbeque), I investigated the stack of films. The Stone Tape leapt out as something I’d never even heard of before. So we watched that. 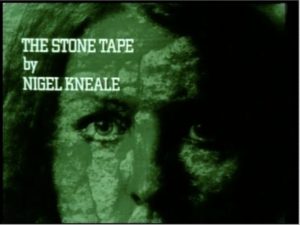 The Stone Tape is a 1972 made-for-the-BBC film, which details the story of a research team who takes over an old mansion to revamp as a data center. As they tour their new office, the leader of the group discovers that one of the rooms, meant to house computer servers, is unexpectedly vacant. Furious, he learns that the work crew was afraid of the room, so no work was completed. Within minutes, a young programmer sees a ghost in the room.

What happens from here is the interesting part. What would a group of scientists and programmers do upon finding a bona fide ghost? Well, they’d throw science at it! They’d investigate the shit out of it!

The technobabble is nothing more than technobabble, of course, but the story does take an interesting tack with explaining the ghostly phenomenon.

The screenplay of this little-known gem was written by Nigel Kneale, aka the man who wrote all the Quatermass films. This is great stuff. Grade A science fiction.

Also of note is the fact that the main character, the brilliant head programmer of the project, is a woman. If The Stone Tape were written ten years later and/or by a lesser writer, the woman would simply have been a love interest, or if the head programmer would have been written as a man.

The film is definitely worth tracking down. It’s available for cheap on Amazon, and can be tracked down in bits and pieces on YouTube. Happy hunting!