Home Best of the Blog Cabin in the Woods, and Why I Shouldn’t Be a Movie Critic

Cabin in the Woods, and Why I Shouldn’t Be a Movie Critic 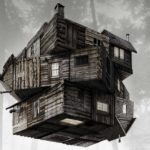 Let me start out by saying this: I love Cabin in the Woods. I love it unabashedly. I’m not a Whedonista by any means, so I’m not being a dittohead just because Joss worked on this project. I simply love the film. I love horror films, but I’m extremely picky about them, and Cabin in the Woods simply fills me with joy. It deconstructs, satirizes, and twists the genre that I love, and yet it does these things with a deft and loving hand. Love, love, love.

I saw the film last December at The Butt-Numb-a-Thon, and I’ve been giddy about it ever since. I’m pleased as punch that it hit the streets last Friday, and most of the movie nerds I know have now seen it and now share my glee.

If you haven’t seen the film yet, don’t read the rest of this post. Go out to see the post-haste. Don’t watch a trailer, don’t look up the plot, just go see it.

If you have seen the film, please continue. What follows the cut isn’t necessarily a discussion of the film, but it does include a couple major spoilers.

Here’s a somewhat guilty admission of mine: I really like reading critiques, particularly for movies. I almost never read reviews before I see a film, but I’ll normally glut upon them after a viewing.

I like seeing a movie almost completely cold: the less I know when I go in, the better. However, once the film is over, I dig into the Internet for trivia, reviews, trailers, etc. If I just watched a classic film for the first time, I almost sprint for Roger Ebert’s Great Movies column after it’s over.

Because I suck at catching the deeper meaning of films. For all of the cinematic knowledge that I harbor in my head, for all the time I spent actually studying this stuff in college, I am unable to catch subtext unless it bites me in my ample ass, and then parades around my living room with a picket sign that says, “WOOO! I’M SUBTEXT!” Reading a good critique clues me into the things that I probably missed.

In the case of Cabin in the Woods, I had to wait four months and read a LiveJournal review in order to catch this: the big, bad demons at the end probably represent the moviegoing public at large.

OH. DUH. OF COURSE THEY DO. Suddenly, I love Cabin in the Woods even more, because there’s a whole new aspect that I never noticed or thought about. Of course, Cabin in the Woods couldn’t have been clearer about this intent, short of reaching out of the screen and smacking me unceremoniously with a clue-by-four.

And that, my friends, is why I feel I’m a lousy critic. I know technical aspects of filmmaking up, down, and sideways. I can tell you about a film’s storytelling techniques, its approach to pacing, how it crafts a scene through editing/music/timing. I can even tell you how it succeeds or fails in being an entertaining or thoughtful piece of work. But I couldn’t tell you a goddamned thing about the deeper meanings of Fellini’s La Dolce Vita if Mr. Ebert hadn’t clued me in.

Granted, Mr. Ebert is one of the greatest film scholars in the world, and he’s paid to digest this stuff on a deeper level than I am, and he’s been doing just that for longer than I’ve been alive. Granted, at the end of the day, a movie only means what it does to a particular viewer, with their particular live experiences and tastes, and no outside opinion really counts. Granted, people have spent entire doctoral theses delving into the world’s finest works of film, and I, as a mostly casual viewer, can’t be expected to see in one viewing in what they noticed only after the twentieth. While my knowledge of film is much deeper than that of the average bear, that doesn’t mean I know everything about cinema.

But damn, I’ve seen 122 films in the last four months. I should have at least noticed that angle of Cabin in the Woods.