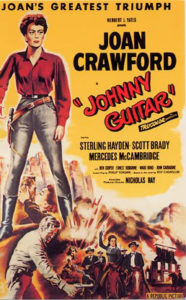 I’m a movie nerd to the extent that, somewhere around 2005, I started building a strange database. When I first built it, it simply listed all the movies in IMDB’s Top 50/Top 250 lists, and which ones I had seen. I’d refresh the data every few months.

Over the years, it grew in scope. The tool now uses list rankings to generate a “score”, by which I statistically rate the “value” of each film, and which unseen films are most important for me to watch. The tool incorporates IMDB, Rotten Tomatoes, Roger Ebert’s Great Movies list, and certain Academy Awards categories. This data monster lists 2,913 films. As of today, I have seen 28% of them.

The reason I do this is because it pushes me to watch films that I wouldn’t ordinarily watch. If I simply walked into a video store (and yes, I still do this) and had no plan, I’d most likely pick up a cheesy horror film and enjoy the hell out of it. And there’s nothing wrong with that. However, having this list to conquer makes me dig into 1940s war films and 1950s musicals and westerns and silent movies and lots and lots of foreign movies from the 1960s. And do you know what? A lot of that stuff is awesome.

Since I’ve been picking off the top-scoring films on this database for years, I’ve covered most of the best-of-the-best. I’ve seen the Raging Bulls and the 8 1/2s and the Godfathers and the Casablancas of the world. Now I’m starting to dig into the more obscure stuff.

Which is what brings me to Johnny Guitar, which I watched last night.

Johnny Guitar isn’t an obscure movie to some people. It appears on IMDB and Rotten Tomatoes “best of” lists, Roger Ebert has written upon it for his Great Movies column, and I’m sure fans of westerns are well familiar with the film. However, I, movie nerd that I am, had never heard of it until I saw it listed in my database. The film has never been released on DVD in the USA. If you try buying it on Amazon, you’ll be looking at buying a used region-free import DVD or a $20 VHS tape. (Seriously! VHS!) I only managed to get my hands on a copy when I found an ancient VHS rental tape at Video Universe.

What a strange, fascinating film!

Here we have a western, released in 1954, wherein men seem to be merely accessorial to the movie. The title “Johnny Guitar” is misleading, because the film has almost nothing to do with Sterling Hayden’s character. He just seems to show up and observe things. The film entirely centers around Joan Crawford (who spends most of the film in pants and a gun belt) and Mercedes McCambridge (who plays a cattle baron who has no problem weilding a gun and her own posse).

The two women, both land and business owners, abhor each other. There are some men mentioned in connection to this hatred, but it seems to really be about territory and, perhaps, a smattering of homosexual tension. This is their film, and they rule the movie with iron fists. In most scenes, men scatter or gather behind the two women, and they seem to move in currents depending on which lady has the upper hand. 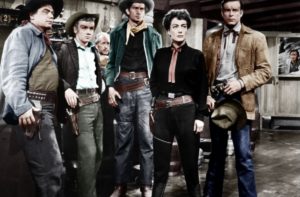 This film was also made on the cheap, so there are approximately 2.3 sets and a smattering of outdoor locations. There may be two fight scenes, odd for a western, and one of them even takes place mostly offscreen. Everything in this movie relies on dialogue and the nearly tangible hate-chemistry between Crawford and McCambridge. (Legend has it that the two women hated each other offscreen as well, a feud that at one point involved Crawford strewing McCambridge’s costumes upon a highway.)

And what dialogue for 1954! It’s very strange. Cynical and cutting, even when there is supposed to be romance going on. Eventually, the film even wanders into territory where it could be considered a commentary on HUAC, making Johnny Guitar an ideal double-feature pairing for High Noon. 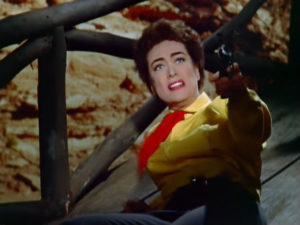 Beyond that, I don’t know what else I can say about Johnny Guitar that Roger Ebert hasn’t already said with more grace. I just felt like Marco Polo for the moment when I discovered it, and I had to share. See it if you can find it!