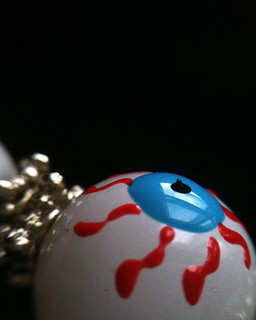 According to my Fitbit Flex, the average amount of sleep I currently get is around four hours per 24 hour round. In the last month, there has been only one night where have I slept longer than 6 hours. Last night, I slept about 90 minutes, total.

The weird part is that I haven’t been sleepy during the day. I definitely don’t feel right, but I seem to be alert and functional. (I did ask a coworker this morning if my face showed human emotions, though, so your definition of “functional” might be different from mine.)

The Fitbit graph shows a steady decline over several months, from an average of six hours of sleep per night in December, to around five in February, to four by the end of April.

There is probably a confluence of reasons for this. The stress of getting married a few weeks ago (along with a second ceremony for the parents this weekend). New medication, started in February. General disarray in my life. The wax and wane of OCD. A constant feeling of being behind on all my projects, so I keep putting in longer hours to keep up.

The impact of the insomnia is deep, even though I can still mostly operate as a human being at this point. I’m feeling distant from my husband because I’m awake all night instead of cuddling up and snoozing. I spend a large portion of my waking hours alone in the living room, in silence, working on projects. The part of the day where I am around humans, I feel like I’m not fully engaged. I’m not exercising, because my day is so out of whack that I can’t carve out the time, and I don’t want to go out running at night because it might make the insomnia even worse.

I’m worried that the line on the graph will continue to decline to lower numbers. I’m wondering if I’ve forgotten how to sleep.

However, this really isn’t unusual for me.

I didn’t sleep a whole lot as a kid.

I was a night-owl from an early age. I remember watching Jane Curtin on Saturday Night Live, which means I was regularly staying up until midnight prior to age 5. As I aged through elementary school, I’d stay up late after bedtime, either reading or sneaking out of my room to watch late-night British television shows on PBS. By the time high school hit, I simply slept very little, working on homework or projects or the budding local BBS community for much of the night. I’d be cranky on the weekday mornings, and I would always sleep in on the weekends, but short nights were the norm.

Mostly, it worked out fine.

I do, however, remember a vacation to California. My mom and then-stepfather took me to Los Angeles sometime in the mid-1980s. I was delighted by the RMS Queen Mary, Hollywood, and Universal Studios, but aside than that, I remember being bottomlessly angry at my then-stepfather. (This was a state I was in for over a decade. He and I did not get along.)

I do not remember sleeping at all for the duration of the week-long vacation. Attempts were made, but ultimately failed. I remember dealing with hallucinations and becoming less and less capable of dealing with anything as the week progressed.

I had another inexplicable stint like that in college. After several days of no sleep, I recall sitting in a Perkins Restaurant with friends, and then realizing that I was watching the pattern on the carpet come to life.

Years later, I saw the Terry Gilliam adaptation of Fear and Loathing in Los Vegas. The scene in the hotel lobby with Katherine Helmond as the fish-clerk is a disturbingly accurate portrayal of that end-of-line insomniac state.

When I was working in comics, there was a period of time where I was heavily experimenting with sleep schedules. I essentially had two full-time jobs: a standard corporate office day job, and coloring comics in the evening.

I discovered that I often fell behind on the comic art because after I came home from Day Job work, I didn’t much feel like working any more. My brain needed a break, and by the time I’d had my break, there wasn’t much time left for comics.  Thus, I started sleeping in the evenings: I’d come home from work, sleep until midnight, then I’d wake up and color comics until it was time to leave for the Day Job.

I soon started becoming weird. All those overnight hours where my only company was a webcam pointed at Sydney Harbor (where I could at least see some sunlight) took a toll on my personality. Also, while going straight from comics to Day Job was easier than the reverse, it was still tiring.

As I said earlier, though, mostly it works out fine. In my adult life, I consider six hours of sleep a happy amount, and five to be OK. Anything over 7 hours per night is a miracle.

In March of 2011, I was in a (stupid) bike accident that injured my low back and severely tore my right rotator cuff. After a few days of rest and painkillers, I was ordered by the doctor to not to sit for longer than 10 minutes at a time, period. Inactivity is murder for back injuries.

I was broke after paying all the medical bills, so after work every day, all I’d do was just pace around my apartment, watching movies while doing occasional physical therapy exercises. I think I decided to work on my sleep abilities just out of boredom. Or maybe I just wanted to have fewer conscious hours, because otherwise I was just in a lot of pain.

I had to work up to sleeping like a normal human. It was like exercise. I had to set goals and gradually increase how much I slept.

Eventually, though, I made it to about 7.5 hours per night.

You know what? It felt amazing. I think it’s how alcoholics feel when they kick the habit and get past the cravings. It’s that rush of your body saying, “Oh, so this is what healthy feels like!” I immediately lost about 15 pounds, and my injuries healed up wonderfully.

But I eventually fell out of the sleep habit. So here I am.

You’d think having all these extra hours in a day would be awesome. Honestly, though, most of them aren’t very useful.

Yes, I manage to maintain several side projects while also working a regular day job, as well as having a busy social life and travel and exercise and et cetera. However, I’d still be able to do that while having a normal amount of sleep. When you sleep properly — and I mean really sleep — the remaining hours are more efficient.

Hours gained through insomnia are disproportionately filled with things like Facebook or video games, low-denominator activities because that’s all you have the mental energy for. I’m not staying up until 4am writing the great American novel or catching up on photo editing or even watching a movie. Instead, I’m letting my OCD take over and I’m on a loop doing something useless.

I’m lucky that I can be pushed a little further into the insomnia zone than the average human without much consequence. But beyond that, I’m like any other insomniac, wasting time until my body and brain shut down.

The trick is stopping the bus for long enough to disembark. You stay up too late, so you sleep to late, so you don’t get tired until later, so then you stay up even later, and so on. Meanwhile, you’re getting less efficient, so you work harder to accomplish less. Then you actually get tired and sleep all evening, but then you wake up at 10pm and now you’re awake until sunrise and now the problem is even worse.

The parallels between addiction and my brand of insomnia are striking.

I’ve seen too many sunrises this week, all on the wrong side of my wakeful hours. It is perhaps sad and telling that I’d prefer to miss seeing sunrise for a while.