Looking Back and Looking Forward

I sucked at keeping it together in 2015.

No, that’s probably not quite right, even though that’s how it feels on the first day of 2016. I sucked at keeping my brain together in 2015. On the outside, if I look at the evidence, there’s a lot I did in 2015 that should make me proud. The fact that I accomplished any of it while being sabotaged by my own personal issues is a wonderment. It’s weird that I can look back on all the stuff that happened in 2015 and only see weight gain, daily struggles with mental illness, far too little creativity, and way too much alcohol.

This is my first Tin Lizard blog post in over a year, which belies a year were I felt I was either doing too little of import or was doing too much to talk about it. I look at my computer records and see swaths of unedited photos and the sputtered sparks of once-promising projects. It’s like simultaneously looking at a year that didn’t happen and a year that was too full to have any sense applied to it.

Thus, to smack my brain back to reality, I need to list what I actually accomplished in 2015. I need to dump all the junk out of the box so I can sift through and find the keepers. Perhaps then I’ll be able to hash out what truly has been missing.

Looking back on it all, I think I know what was slowly killing me inside (apart from the long hours spent at the corporate job). Most of what I worked on last year were creative endeavors that either have been running for years (PowerPoint Karaoke, etc.) or only exist to comment on other people’s endeavors (literally a hundred movie podcasts). I didn’t create much that was entirely new, like a short film or even just new photographs. I wasn’t able to do a whole lot to help other people, either. I didn’t get to volunteer, participate in, or even attend this year’s Minnesota Fringe Festival. One of my best projects ever, The Sound and the Foley, has lain fallow for over two years. The dearth of doing anything of substantial creativity has left me feeling trapped in my head, like I no longer have the ability to push anything out into the real world.

But a lot happened last year, even outside that list. I had a couple cancer scares. I got sick a couple times, and had to work anyway. I nearly got laid off. Fes did get laid off. There were weddings and deaths and babies and interpersonal drama. I keep feeling like I was too lazy to accomplish anything, but the reality is probably that I was just legitimately exhausted, even beyond the level that I usually am.

So, goodbye to 2015. May I forever remember your bright spots, while the memory of the grueling hours fades slowly away. In 2016, I hope to make friends with my body again, so together we can breathe some real awesome back into the world. I just need to remember the words I had tattooed upon my leg this spring… 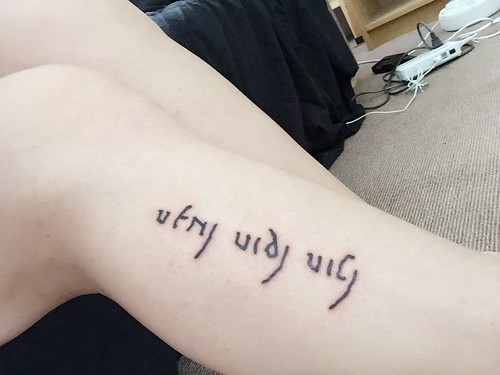