I enjoy Ebertfest greatly. I’ve attended the film festival since 2009, and I find it to be a great, relaxing endeavor. The festival features only 12 films over the course of five days (compare that to Butt-Numb-a-Thon, which shows that many in 24 hours). The festival takes place in a gorgeous old theater in Champaign, IL, a small college town with a large number of gorgeous old buildings. Near the theater are restaurants I greatly enjoy. Near Champaign is Urbana, where my friend Mirko has a spare bedroom.

In the past, Roger Ebert hand-picked each film. This year is no exception, even though Mr. Ebert sadly passed away mere days ago.

I expected tears upon opening night. And yes, there were misty eyes, particularly when Roger’s wife, Chaz, took the stage for opening remarks while wearing Roger’s white scarf.

But Roger worked hard in recent years to make the festival sustainable outside his presence. Chaz said that Roger left behind a list of films that will keep Ebertfest running for years, and it sounds like the festival will be in the capable hands of Chaz, the Virginia Theatre, and the University of Illinois.

The festival opened last night with screenings of a short film by one of Roger’s Far-Flung Correspondents (I Remember, dir. Grace Wang), followed by Days of Heaven (1978) and a Q&A with Days of Heaven‘s second Director of Photography, the legendary Haskell Wexler. 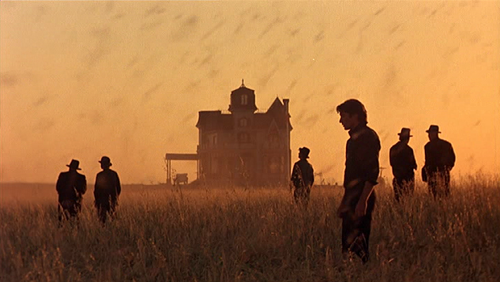 I usually don’t engage well with Terrance Malick films. That’s a matter of personal taste, though, and not a flaw in Malick’s work. His films are kaleidoscopic and painterly. Gorgeous. However, I also find them emotionally distant to the point of being opaque.

But that’s just me.

Days of Heaven is no different. The film doesn’t engage me at my core. Part of the problem may be that I had a hard time understanding the voices in the film, so I missed about 50% of the dialogue. I’m not sure if that was an issue with how the sound was mixed in the theater, combined with accents and the fact that I’m kind of deaf, but there it is. If I watched the film again, I’d turn on subtitles. Still, the story is simple enough that I had no problem following along.

That said, the film is a feast for the eyes like no other. The two cinematographers (Nestor Almendros and Haskell Wexler, two of the greatest DPs to ever walk the planet) shot the film only in available light, almost entirely during the Golden Hour. The resulting images are achingly lovely.

The tale the film tells is incredibly simple. Two farm laborers, lovers who are masquerading as brother and sister, scheme to marry the woman to their dying boss so they can inherit his estate. The tale is told in minutiae and half-heard lines. The tone of the film is so steeped in beauty that you barely notice the ramp up to the film’s climax.

The Q&A after the film with Haskell Wexler was great, because he is currently 91 years old and still quite vibrant. He didn’t go much into talking about the production beyond what I already knew from IMDB, but it’s always much more fun hearing a real human tell those stories.

The locust attack, by the way, was created by throwing coffee beans out of a helicopter, then running the film backward. Amazing.