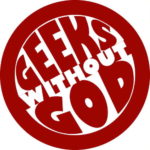 At CONvergence this past weekend, I was proud to be the featured guest on the very first episode of Geeks Without God, a comedy/geek/atheism podcast created by Tim Wick, Molly Glover, and Nick Glover. Among other things, I was asked to bitch about Prometheus, which I happily obliged. Check out the episode here! (Warning: TONS AND TONS of Prometheus spoilers are contained within. If you still want a spoiler-free version of my thoughts on the film, I posted it a few weeks back.)

We recorded at 9:30am in the morning (which, at a convention, may as well have been 4am), yet we managed to draw an awesome, lively audience. Thanks to all who attended the recording!

Bonus trivia: I also designed the Geeks Without God logo. I’m thrilled to be able to contribute to the project!