Last night’s PowerPoint Karaoke was one of the best we’ve ever had. The audience was small, yet lively, and all four performers (Allegra Lingo, Levi Weinhagen, Joe Bozic, and last-minute-addition Kelvin Hatle) had very strong presentations. The final group presentation, which veered off into the topics of pornography and pudding, brought tears of laughter to my eyes. Bravo, presenters!

Last night’s show will be the last at the Bryant-Lake Bowl until September, when we will resume our first-Tuesday-of-each-month schedule. In the meantime, you can find us at CONvergence, when the show will feature the likes of Tim Uren, Tim Wick, Jen Scott, Sharon Stiteler, C. Robert Cargill, Lyda Morehouse,  and Joseph Scrimshaw. Oh, and, as always, slides by Bill Stiteler and myself.

After that, we take August off, because Minneapolis Fringe Festival will eat every actor in Minneapolis during that month. If you can’t see us at CONvergence, then mark your calendar for September 4th!

I do love producing the slides for the show every month, even though it still feels unnatural to pull comedy out of my head on a reliable schedule. It seems a shame to only use the slides once. There was talk this evening of doing an “open mic” PowerPoint Karaoke show at some point, using our favorite older slides.

Until that happens, I’ll show you one of my favorites from tonight.

Most of our slides are just random digital flotsam, cobbled together into an non-cohesive jumble by two Internet-addicted, possibly drunk, definitely sleep-deprived nerds. Yet, every once in a while, we get topical. 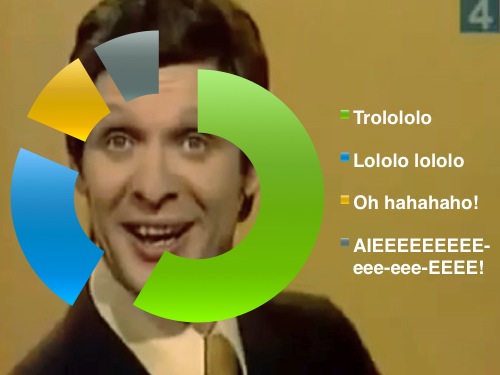 This one broke Kelvin for a moment, which means I’ve done my job well. However, I want to get a little serious here.

I know the Internet has already said this a million times over, but requiescat in pace, Eduard Khil, aka Trololo Guy. In a digital world where a ravenous audience feasts upon memes that usually feature injury or stupidity, you charmed the beasts with nothing but nonsense lyrics, a beaming smile, and a glorious baritone voice.

Mr. Khil left behind a large body of work besides the famed “trololo” song. Here’s a YouTube playlist with some other favorites from his oeuvre.