Home Best of the Blog Guitar Wolf, and the Meaning of Stuff

Guitar Wolf, and the Meaning of Stuff

In lieu of traditional Easter celebrations yesterday, I went to a Guitar Wolf concert at First Avenue’s 7th Street Entry.

Who are Guitar Wolf? I hear some of you ask. Well, they’re a Japanese garage punk band, founded in the late 1980s. Aside from starring in strange Japanese B-grade sci-fi movies, they have earned a reputation for hosting awesome rock shows. Thus, when I heard they were coming to Minneapolis, I plunked down $15 for a ticket, even though I never really listened to their music. I just knew it was going to be an awesome rock show. Then I paid an additional $15 to drag Fes Works along, even though he had absolutely zero knowledge of what I was dragging him into. Small venues ROCK! So does the HDR setting on the iPhone 4s camera!

It was, indeed, an awesome rock show. Fes Works and I were joined at stage right by my friends Kelvin Hatle and rock photographer Erik Hess, so we had a little corner of awesome going right in the sweat spray zone of the bands. The two opening acts (locals The Birthday Suits and New Zealanders The Transistors) managed to rock our faces off and damage no less than three guitars.

Then the main act came on, and proceeded to whip the audience into a frenzy for a few hours. I think I only understood two words that came out of Seiji's mouth all night: "Minn-eh-so-TAH!" and "FAAAAASTERRRRRR!"

Seriously, these guys are amazing. If you have any interest in really LOUD music and a certain amount of property/bodily damage, go see these guys. They are made of pure energy. They know how to perform.

But I haven’t gotten to the cool part yet.

At one point, Seiji, the lead guitarist, reached out into the audience, grabbed Fes’ hand, and hauled him up on stage. Seiji then hung his guitar over Fes’ neck, bestowed a guitar pick upon him, and made him play guitar.

Let me reiterate: until that night, Fes had no idea who Guitar Wolf was. He also has no idea how to play guitar. Now he was onstage, holding a guitar in front of a howling audience, and a crazy, sweaty, incomprehensible Japanese man was shrieking what was presumably music lessons. Fes looked alternately bewildered and terrified. Fes proving that you don't need to know how to play guitar in order to play punk rock on top of a sweaty Japanese man.

Fes was up there for what was probably ten minutes, while Seiji crowd-surfed and climbed into the rafters above the audience.

Fes eventually earned his freedom, hopped off the stage, and gave the guitar pick to me.

Did I mention it was our three year anniversary yesterday?

We proceeded to rock our faces off, as Guitar Wolf came out for something like three encores, each crazier than the last. The final one culminated in a human pyramid: It was around that time that the guitar pick fell out of my pocket.

When I initially put the pick in the pocket of my jeans, I knew that it was a bad storage area. I figured I’d move it as soon as I thought of a better solution. When I thought, “Hey, I should zip it into my coin purse,” and reached for it, the pick tumbled out of my fingers and onto the ground.

And it was gone.

Kelvin, Fes, and I all searched for it. However, by that time, the band had flung a few more picks into the audience. I’m sure someone spotted ours on the ground and snatched it up in seconds.

I was horrified and sick. Fes earned that pick by playing guitar with Guitar Wolf, and he gave it to me on our anniversary, and I lost it. 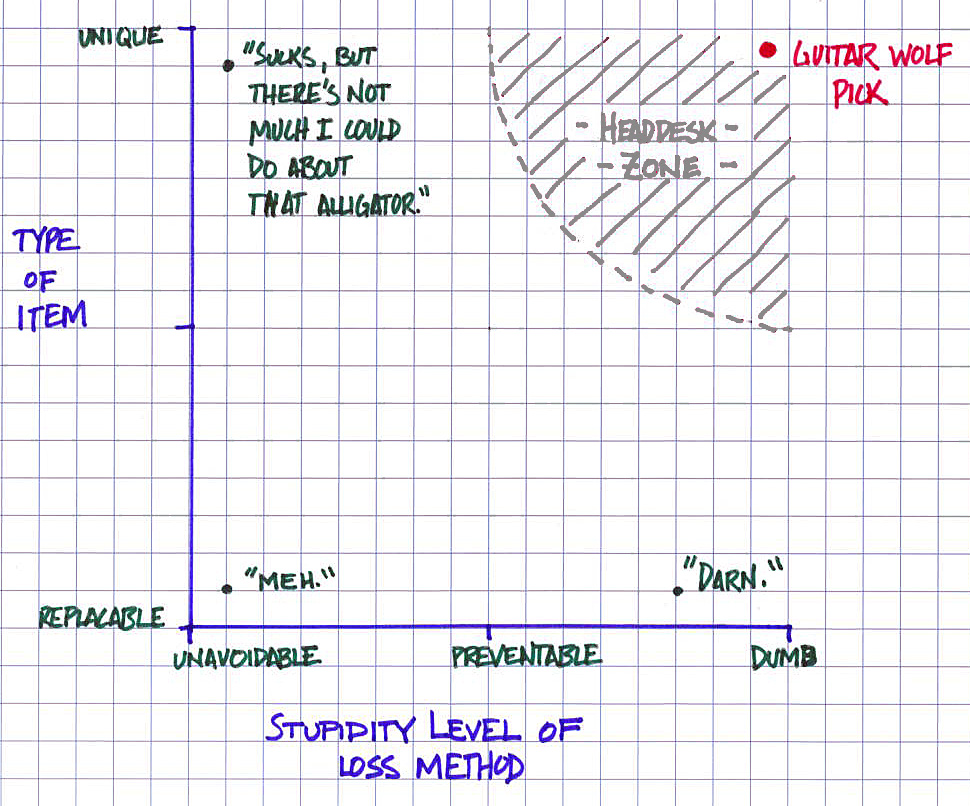 I made a graph to explain my anguish.

The night closed with a smattering of other small disappointments. It turned out that Erik wasn’t feeling well, and thus missed Fes being onstage, which means the only photo that currently exists of this event is the one I took on my iPhone. I met Seiji backstage, but nobody had a pen, so I couldn’t get my Guitar Wolf comic signed.

It sucked that the night ended on such a down note for me.

And the thing is… that’s so dumb. Ultimately, the pick was a tiny piece of printed plastic. The comic book would have just had a little more ink on it. I did at least get one photo.

I got to see Guitar Wolf play last night. I was so close to the stage that I nearly got smacked in the face with a bass guitar. I got covered in Guitar Wolf sweat and flung beer. I played crowd support for the mosh pit, and have no bruises or broken bones the next day. I have a boyfriend who endured a screaming Japanese man onstage, and gave me trophy that he earned. I got to meet Seiji after the show and shake his hand and say thank you.

On top of that, I got to share that experience with Kelvin and Erik. Hell, I think that was the first conversation I’ve had with Erik in at least a year, and it was wonderful to catch up.

And after it all, we all hung around outside the venue on a beautiful spring night, playing hackeysack with someone’s abandoned hair weave.

How is that not absolutely fucking awesome?

A while ago, I read a study about how it is better to spend money on experiences instead of possessions. At the end of all things, the stuff that makes you truly happy is the stuff that you do and see, instead of the stuff you own.

Yes, the pick was imbued with meaning. It would have embodied a really cool memory for me. But in the end, it really is just a bit of plastic.

At least, that’s what I’m telling myself this morning. I keep looking in my sneakers, hoping that the pick somehow fell into my shoe.