Movies by Math: The Sequel 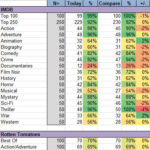 I got enough comments and questions via Twitter, Facebook, and other avenues about my previous post that I figured I’d elaborate upon my crazy statistical methods.

First of all, to those who wanted a post about movies that actually contain math, here’s a lovely link to a page mainained by Harvard’s math department. How cool is that? VERY.

Secondly, I shall address that I got the most questions about: what’s the actual formula?

Sit back. This will take a while.

I built my movie tracking tool to be tailored to my personal tastes. This thing is NOT meant to scientifically balance all factors to generate a universal “best of” movie list. It was meant to help me discover really awesome films that I’d never seen before.

Also, the way I built this monster is really fidgety. A user interface designer would be horrified.

So, no, I’m not going to publish the tool itself. I’ll just detail what I did and why, and, if you like, you could build your own widget that would serve your needs.

Okay, I’ll admit it. I built this thing in Excel. I keep thinking about turning it into an Access database, but I’m lazy.

The Excel file is a wretched hive of VB macros, tabs, conditional formatting, VLOOKUP commands, and nested pivot tables. Specifically, there are 67 pivot tables, pulling together data from 28 sources where the key data doesn’t necessarily match. (For instance, IMDB and Rotten Tomatoes can list the same film under a different title, like “Bicycle Thieves (1948)” and “The Bicycle Thief / Bicycle Thieves (1949)”. Easy to match if you’re human, but not so much if you’re a computer.) I won’t get into how I got this all working, because that would be boring. I’ll just say that I put the raw data in one end, and the thing will spit out fresh numbers in under a second. So it works, even though it’s cobbled together from the digital equvalent of fish hooks, gum wrappers, cat saliva, parsnips, and Roto-Rooter parts.

(In my defense, I’ll just say I started building it in 2005. This is the Winchester Mansion of databases.)

I just refreshed the data this morning. The database currently tracks 2,931 films. I have seen 28% of them.

I call this tool The Megalist.

The main thing that the Megalist does is calculate a “score” for each film. The higher the number, the more likely a movie will be a film of great historical/artistic/entertainment value (…according to my tastes, anyway).

There are four major data sources:

And here are the specific sources and the math associated with them. Explanations are below the list:

In yesterday’s post, I noted that the Megalist says Aliens is the awesomest movie in history. Here’s how the math works out:

And so on. The final total for Aliens is a whopping 950 points.

It does work. After several years of picking away at this list, I’ve seen the best of the best. Even though I’ve only seen 28% of the films by number, I’ve slain 68% of the points.

Of the films I have not seen yet, these are the ones that have the highest point totals:

Two films are sprawled across 14 categories: Lawrence of Arabia and Chinatown.

Netflix Streaming has a lot more of the movies I want to see (276) than Hulu Plus (158), but Hulu Plus has better movies (at an average of 45 points per film, as opposed to 30 points per film). This is thanks to the Criterion Collection, which has an exclusive streaming contract with Hulu.

I spend way too much time thinking about stuff like this.