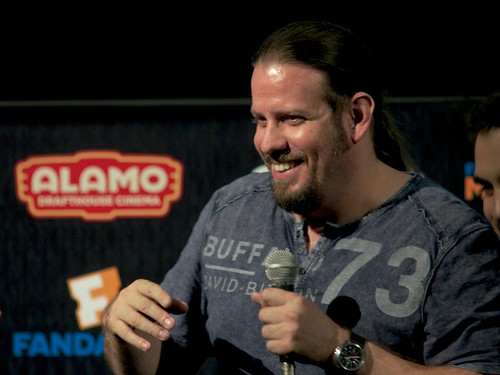 On the penultimate day of Fantastic Fest, I thankfully hit my second wind. I was still exhausted, but I’d gone past the zombie state into a sort of zen master peace.

It is by movies alone that I set my mind in motion.

One of my film slots yesterday was taken up by the animated shorts program, so I only got to see four features. It was still a solid day, though.

Shrew’s Nest is an incredible Whatever Happened to Baby Jane-style thriller from Spain. The plot centers around two sisters, the elder of whom has severe agoraphobia and thus cannot leave their apartment. As the film slowly reveals the damaged background of the two women, a handsome male neighbor falls down the stairs, and the eldest sister takes him in… and makes sure he cannot leave. The film is completely character driven, and it is grounded by a masterful performance by Macarena Gomez. Great stuff.

Open Windows is the new film by Nacho Vigalondo, the man who brought the world Timecrimes. Open Windows is the story of a regular-guy movie blogger who becomes wrapped up in a complicated scheme that somehow involves the actress that he blogs about. The narrative conceit of the film is that it takes place entirely on one computer screen, and the plot plays out across different windows on the screen. The film feels artificial and stilted until you relax into the style of storytelling, then it becomes a solid little thriller. And by the end, you learn that the things that were off-putting at first were actually necessary and intentional. Open Windows is, from beginning to end, ambitious and clever.

(Incidentally, I was an extra for Open Windows when it shot in Austin about two years ago. The back of my head and my camera are visible in the scene filmed at the Alamo Drafthouse. Thanks to Elijah Wood’s presence in the film, my camera now officially has a Kevin Bacon Number of 2.)

Horns is the latest film from the director of High Tension, and thankfully I can say it’s a better film than High Tension. That’s not to say that it’s great, but it’s engaging and has an interesting premise. Daniel Radcliffe stars as a young man in a small logging town who stands accused of murdering his beloved girlfriend. As he struggles to clear his name, he suddenly wakes up one morning with horns on his head. It turns out that the horns somehow persuade people to tell him the absolute truth about what’s on their mind, so he goes on a mission to find the real murderer. The film is funnier than I expected it to be, though the tone is sometimes uneven. The movie is at its best when it revels in its strange premise.

It Follows is a bizarre, simple, and well-executed horror flick. A teen girl finds that, after having sex with a boy she likes, she finds she is being stalked by an entity that walks after her at all times. She learns that the boy gave the monster to her, and now she must pass it on to someone else (via sex), or else the monster will catch her and kill her. Yes, it’s an obvious allegory for STDs. Yes, it’s a clever premise that allows teenagers to sleep with a lot of other teenagers. Yes, it’s a bit overwrought. However, the film is smarter than expected, the performances are good, and it’s well directed enough that an entity that simply walks at you becomes pretty scary. It Follows ultimately left me with a lot of nagging questions about plot holes and the logic of the creature (do condoms prevent the walking STD monster?), so it wasn’t completely satisfying, but it certainly held my attention throughout.

Now I get to head to the theater, where I will be treated (?) to the five-and-a-half hour director’s cut of Lars von Trier’s Nymph()maniac. If I don’t return, bury my ashes and salt the earth.