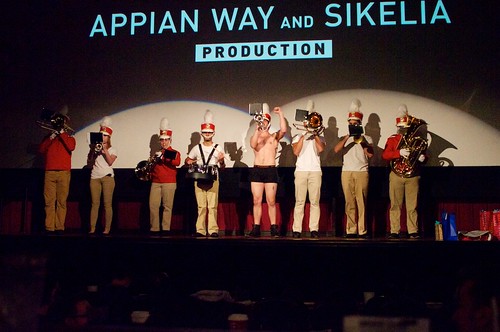 A real live marching band came in at the end of Wolf of Wall Street, but only one of them was mostly naked.

So I’m just going to backdate this post and pop it in here for posterity. I’ve tried to positively ID as many of the trailers as I can, but since it’s been a year, the trailer links might not be to the same version of the trailers we saw. I’ve also created a playlist of all the trailers here on YouTube.

Introduction with Harry Knowles
Trailer: Leprechaun
Trailer: Under the Rainbow
Trailer: The Lord of the Rings (Bakshi version)
Film #3: The Hobbit: The Desolation of Smaug

Introduction with Harry Knowles
Film #4: The Agony and the Ecstasy (shown in 70mm)

Introduction with Tim League
Demonstration and mass audience participation of the act of slap shots
Trailer: a baffling trailer for a Bruceploitation film of unknown title (“Really a good film” with “climax all the time.”)
Trailer: Soul of Bruce Lee (With “touchy” and “strenuous commencement.”)
Film #7: The Dragon Lives Again

Audience receives espresso beans from Doug Benson
Introduction with Harry Knowles
Footage: James Hong on set of Next Kill
Scientific A/C Trailer (Note: this is exactly what I wrote down, but I don’t remember what it referred to)
Film #8: The Loves of Edgar Allen Poe