Home Life On Song of the South and Offensive Movies

On Song of the South and Offensive Movies 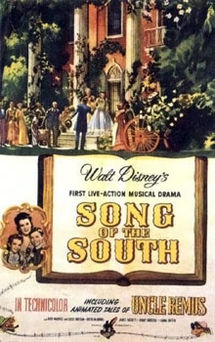 Today’s social media networks are bubbling with the news that Worldcon has scheduled a screening of Song of the South, as part of a program of anime and animation not easily found via DVD or Netflix. Many people are debating whether this is a good idea or not.

The reason Song of the South isn’t found, well, anywhere is because Disney has been hiding it for decades. Made back in 1946, Song of the South frames animated folk tales within a sentimental live-action setting where a black plantation slave tells the tales to visiting white kids. Between presenting slavery through rose-colored glasses and the story of the “tar baby” and everything else, the film is astoundingly racist. Many people saw it as racist back in the 1940s when it was released, and as the civil rights movement progressed and took hold in the US, the film became even more of an embarrassment. While the film won an Oscar for the song “Zip-a-Dee-Doo-Dah”, Disney rereleased the film in theaters a handful of times before stowing it more or less permanently in the vaults. Song of the South has never seen a home video release on US soil.

However, the film does exist, and it is — horribleness and all — a part of cinema history.

I first saw Song of the South in the theater, when it was rereleased in 1980. I was about five years old. I remember that the songs were catchy, but that the movie underwhelmed me. I was the sort of girl who delighted in seeing Princess Leia fire a blaster at Stormtroopers; Song of the South just wasn’t my thing.

I’ve only seen the film one other time. That time, I was an adult, and I watched the film off a friend’s Japanese LaserDisc. This was several years ago, so I no longer remember enough specifics to give a good drill-down, so I will simply say that the film alternates between being skin-crawlingly offensive and boring. I feel absolutely zero urge to sit through it again.

However, I support screenings of the movie, such as the one that WorldCon is hosting, provided it is done right.

Should the film be shown to children? No. Song of the South should never be shown to an audience that does not already possess the tools to critique it on a social level.

Should Disney release the film on home video in the US? Probably not. I am hard-pressed to think of a way that Disney could package the film in a proper context.

But should the film be available for study and critique? Absolutely. Sometimes, the best way we can avoid mistakes in the future is by studying the mistakes of the past.

Back in 2007, I was at the Butt-Numb-a-Thon 24-hour film festival in Austin, TX. Attendees of the BNAT are never told what movies they are about to see; you just show up, and Harry pours movies into your eyes.

That year, during the breakfast hours of the morning, we watched Addio Zio Tom, aka Goodbye Uncle Tom. Wikipedia describes the film thusly:

Here’s the part that Wikipedia misses: Addio Zio Tom is an Italian Mondo-style exploitation piece. While couched in the terms that Wikipedia describes above, the film is clearly made to shock and titillate, right down to a scene where a black slave woman breaks the fourth wall and starts “seducing” the audience (which she calls “Massuh”) and pulling the camera along with her into bed. Beyond that, the filmmakers made the film in Haiti, where extras were surely plentiful and could be convinced to do incredibly humiliating things for the camera for pennies per day. Thus, not only did Addio Zio Tom serve up American slavery as entertainment, it did so by actively exploiting Haitians.

Because the film played around 6 AM, I wound up in the unfortunate position of trying to eat breakfast while watching this horror. I very clearly remember holding a bowl of granola in one hand and a Mimosa in the other, unable to eat either because the screen in front of me was showing a white man shoving wads of straw into the anuses of feces-covered black men.

Legend has it that riots broke out when the film was first screened in New York City in 1971. I completely understand why.

Addio Zio Tom is the most offensive thing I’ve ever seen on film. I walked out during parts of it. I did, however, make myself watch the film to the end.

(Of course, this may be exactly what the filmmakers intended. Welcome to the world of Mondo. Fuck you, Mondo.)

Am I glad I sat through Addio Zio Tom and witnessed just how misguided a film could be? Well, “glad” isn’t the right word. If I’m glad about anything from that screening, it’s the fact that I felt physically ill, because it means I have my priorities straight on a gut level. However, I think it was important that I suffered through it. It’s not pleasant to look into the abyss, but the abyss sure can teach you a few things.

There was only one way that Harry Knowles, a white Texan, could have shown Addio Zio Tom and not get lynched himself. He did it by framing it right.

Harry usually introduces most of the films at Butt-Numb-a-Thon. For Addio Zio Tom, he chose instead to hand the microphone off to another Ain’t It Cool film critic who could tell us quite a bit about the history of the film. This man was also black. (Forgive me, but I’ve forgotten his name.) He gave a very careful introduction, alongside warnings about what we were about to see, before a single frame of film ran. He made it very clear that we were watching this film because it is a horrible footnote in cinema history.

Science-fiction fandom has recently been having a lot of problems dealing with diversity. Women have been flooding into fandom over the last decade or two, but non-white people are still a rarity at conventions in the Western world. Showing Song of the South as a novelty in WorldCon’s movie room probably doesn’t come off as the most welcoming to minorities.

While the WorldCon web site does give a paragraph description about the controversial nature of the film, it’s probably not enough. Why not use the film as a launching point for more programming? Precede it with a panel about racially-insensitive media of the past, or about the changing roles of minorities in media, or something of that nature. Populate the panel with people who aren’t white. Do a discussion after the screening of the movie. There’s a lot of things they could do, and it would make for very interesting programming. If I were going to WorldCon, I’d attend the shit out of that.

UPDATE 6:40 PM 8/21/2013: It seems that WorldCon has pulled Song of the South from their schedule. It’s a shame, as it does look like they were planning to put it into context with further programming. However, they’ve put together a graceful retraction note and an apology. Admirably done, in terms of PR.