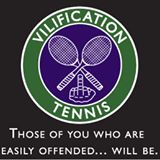 Tonight and tomorrow (July 26th and 27th), I will be running the video screen at the Vilification Tennis show at the Bryant-Lake Bowl. Vilification Tennis is essentially tennis played with insults, and it is one of the more popular and nerdy comedy shows in the Twin Cities. (It is also ridiculously offensive, so if you’ve never seen the show before, be aware of that.)

Tim Wick asked if I could also run a round or two of Judging a Book by Its Cover during the show. The format went over fantastically during its inaugural run at CONvergence 2013, so I expect it will also do well with the Vilification Tennis performers. Essentially, I find some ridiculous book covers and remove the title text; the performers then have five minutes to tell us what the book is about.

(By the way, video of the original CONvergence 2013 panel is online. It’s awesome and you should watch it.)

So, if you want to see Judging a Book by Its Cover run inside another show, or if you just want to be offended for a while, please join us! Tickets sell fast, so buy ahead or show up early!