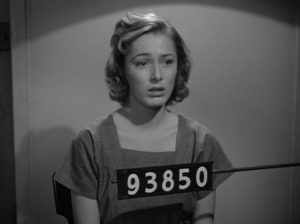 When I say the phrase, “It’s a women-in-prison movie,” my guess is that your first impression is pretty far from what Caged actually is. The trope of a women-in-prison movie was well-worn in the exploitation era, which means it brings to mind things like scandalously torn clothing, shower scenes, and dramatic fights with lots of hair-pulling.

Caged is something else entirely, aside from the fact that its cast consists almost entirely of women. Warner Brothers made it in 1950, smack in the middle of the heyday of classic crime flicks, and it fits right in with the cinematic history of film noir seedy-reality morality plays. The plot involves a 19-year-old woman named Marie who is imprisoned for murder, though it is made clear in the opening scenes that she is a mousy, naive little thing, who only wound up in her predicament because her boyfriend talked her into a robbery that went wrong. She is also pregnant.

The film follows her story entirely, from the moment she is logged into the prison. She endures humiliation from inmates and staff at times, but also finds kindness. She struggles to find her way amidst the jail’s social structure; she fights to keep her baby, despite her incarceration; she rescues a kitten. Despite some soap-opera-like moments, Caged works to show the viewer what it’s actually like inside a women’s prison.

The film has an enormously sympathetic eye for most of its characters, in fact, regardless of whether they are prison staff or prison inmates. Marie’s fellow inmates are prostitutes, thieves, and murderers alright, but we learn why these women fell to such lows. The prison warden, played by the ever-amazing Agnes Moorehead, is a shrewd woman who is nonetheless very sympathetic to her flock; she recognizes more than anyone else that treating prisoners like animals only drives them deeper into a life of crime, so she does everything she can to lift them into better lives. She is, of course, stymied by people who are more interested in punishment, most notably by her larger-than-life prison matron, played with evil zeal by Hope Emerson. 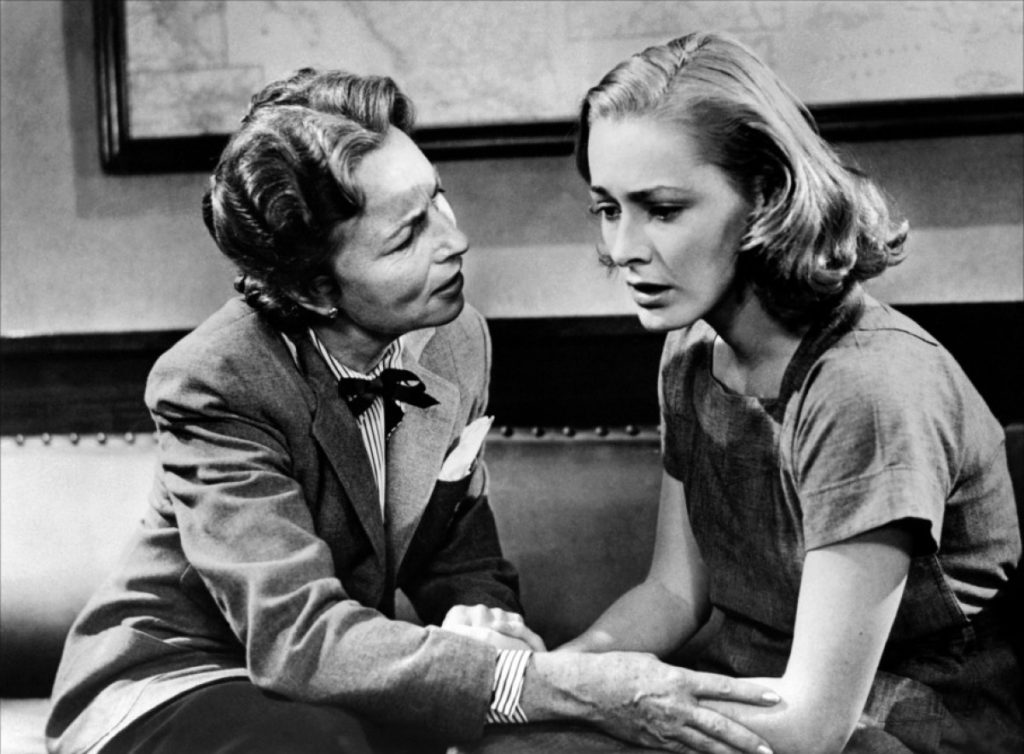 Moorehead and Parker in Caged

The film is fascinating, particularly since it came out of the early 1950’s, right before women got stuck back in the proverbial kitchen in America. If you imagine the prison parts of Jimmy Cagney’s White Heat re-cast with all women, that’s kind of what Caged is like tonally. Sure, the women in Caged are in the clink for some different reasons (there’s usually a man involved in their backstories), but they are the same type of hard-nosed characters you see in men’s prison films of the era. They fight. They play cards. They deal cigarettes. They speak in slang and make shady deals.

Even more interesting is the fact that the screenplay for Caged was written by a woman by the name of Virginia Kellogg, based upon her story (co-authored by Bernard Schoenfeld), Women Without Men. Kellogg deliberately had herself incarcerated in a women’s prison in order to write the story. She has said that the story wasn’t so much a screenplay as it was an almanac of what she saw during her time there.

Oh, did I mention that she also wrote the aforementioned crime classic White Heat?

Aside from the fascinating script, Caged also features some swinging-for-the-fences performances. It’s a treat of a film for anyone interested in crime flicks.

Caged is currently available for streaming rental on iTunes and Vudu.