The Dark Knight Rises (No Spoilers) and Other Bat-Things 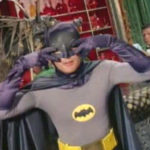 Thanks to Fes Works and Twin Cities Comics, I got to see Christopher Nolan’s latest flick, The Dark Knight Rises, on Wednesday night. I expect most of you already have plans (and possibly) to see this movie, but that won’t stop me from giving my Completely Unsolicited Opinions upon it.

There has been a lot of fan rage recently about good reviews and bad reviews, mostly coming from people who haven’t even seen the film yet. So here’s my curveball:

Seeing it in the theater is an undeniable thrill, because this is a BIG movie. The plot, cityscapes, and thematic scope are all BIG. Epic is an overused word these days, but here it fits in a proper sense. This is an epic closure to the series.

It’s also really dark and grumbly. I’m fine with dark and grumbly stuff, but the film doesn’t seem to be much fun. In fact, the main characters have gotten so dark and grumbly, that I far preferred watching the plot aspects that didn’t involve Batman or Bane. The dark streak served the previous two films well, but you also got a sense of fun from those films. This one is pretty humorless.

Bane is a pretty uninteresting character, and Tom Hardy is lost behind the face-covering mask. I think the biggest flaw of this final trilogy entry is the fact that the villain isn’t very dynamic. At no point in the film, did I sit up and say, “Wow, this is an amazing moment.” The film was a series of very competent moments, but I didn’t feel transcended beyond the film. The Dark Knight, by comparison, was fuelled by a legendary performance from Heath Ledger, and thus yielded many truly iconic scenes.

There are some nice little bits in the latter third of the movie, mostly involving supporting characters that you may or may not have expected to turn up. One bit actually drew an audible cheer from the audience.

There are some nice story elements. There are a couple truly boneheaded things about the script. The way the ending tied up made me wanting to see more of that world, but I didn’t really want to know more about the one I just watched.

TO IMAX OR NOT TO IMAX?

I often get questions about which format certain films should be seen in, given that ticket prices are expensive enough without 3D or IMAX thrown in.

Here’s my rule: see it in the original format. If a film was actually filmed in IMAX or 3D, see it in IMAX or 3D. Otherwise, skip it. Conversions suck.

Additionally, if you see a film in IMAX, see it in an actual IMAX theater. IMAX DIGITAL IS NOT TRUE IMAX! IMAX Digital is often called LieMAX among cineasts, because these theater show a cropped image from a digital print, not the full 70mm print. Here’s a great, detailed article, as the format specifically relates to The Dark Knight Rises.

True IMAX screens are nearly square, and are nearly 100 feet across. There are several “IMAX” theaters here in Minneapolis/St. Paul, but only one (the Minnesota Zoo) that actually shows first-run theatrical films in true IMAX format. The LF Examiner web site, dedicated to large format filmmaking, has a nice list that can help you find a true IMAX theater in your area.

So, with that out of the way, I will say: I did not get to see the IMAX print last night, but the scope of the film would make it worthwhile. The Dark Knight Rises was actually filmed in IMAX, so my verdict is: shell out the cash for real IMAX here.

I HATE THE MALL OF AMERICA THEATERS

We saw the film at the Mall of America Theaters. If the screening hadn’t been there, I would never have seen the film there. I actively avoid that theater, because I’ve never had a good theater experience there. Speaker problems, focus problems… there was even one time I saw a scene played upside down and backwards. Terrible theater.

This time, the bass was blown out of one of the speakers. If there’s anything The Dark Knight Rises has is a lot of bass in the soundtrack. It sounded like a box fan full of June bugs.

IMAX or no IMAX, go see the movie in a theater with a proper sound system.

Okay, here’s one spoiler: Batman never shows up wrapped in a tortilla.

HERE’S THE BATMAN MOVIE I WANT

As long as my brain is wandering in Bat-Fantasyland, I’ll give you my pitch for a fourth Christopher Nolan Batman film. I came up with this concept several years ago, and I can’t get it out of my head. Now it can linger in yours.

Here’s the Batman movie I want:

Bob Hoskins plays Oswald Cobblepot, aka The Penguin, a dapper-yet-down-on-his-luck arms dealer. He forms an alliance with Dr. Pamela Isely, aka Poison Ivy, a bio-terrorist. DARK AND GRITTY HIJINKS ENSUE.

These were made a couple of years back (ancient history in terms of the Internet), but as Christian Bale grumbled through is Batman mask, they are all I could think of:

Seriously. The kids in these videos are hilarious. It’s kind of genius.

Okay, I kind of lied earlier when I said that nothing really transcended and thrilled me in the theater last night. There was one thing. This.

That’s right. Ben Affleck (who is an okay actor but a damned fine director) is making a movie about the Canadian Caper, the covert rescue of six American diplomats in 1979 which partly involved a crazy plan about a fake movie shoot.

THIS IS A MOVIE I WANT. SHUT UP AND TAKE MY MONEY.