Home Life So, let’s talk about The Interview…

So, let’s talk about The Interview… 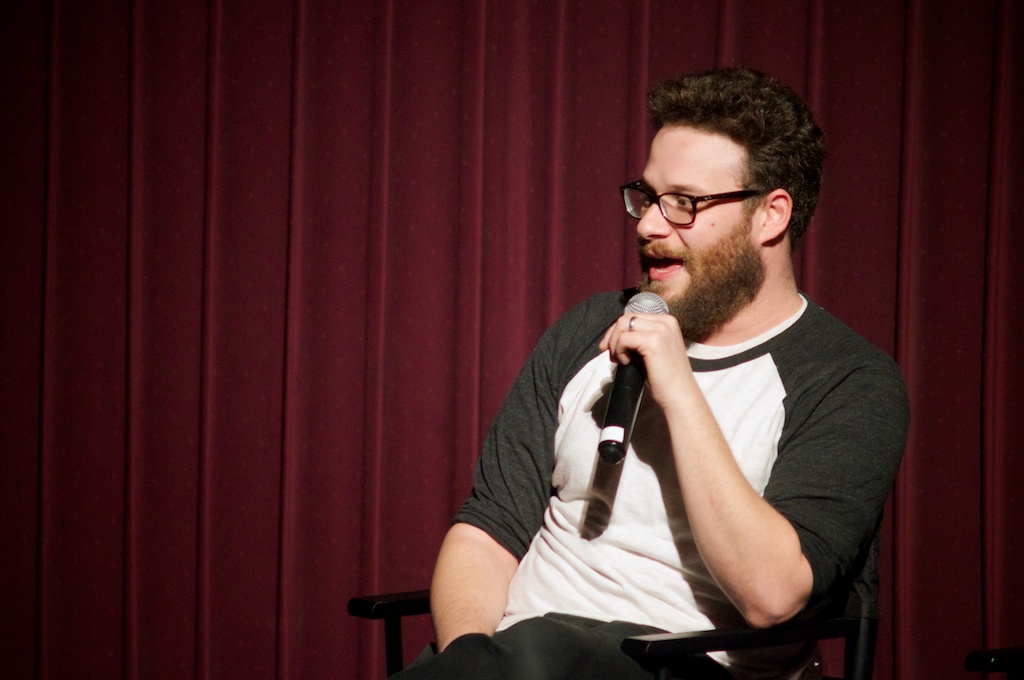 Seth Rogen at Butt-Numb-a-Thon in Austin, TX, on December 13th, 2014. This is the last time The Interview was screened, and two days before studios started refusing to play the film.

Over the last few days, a movie became the biggest news story in America. Thanks to hackers who held Sony hostage with embarrassing e-mails, confidential employee information, and eventually terrorist threats, The Interview has been pulled from distribution. As of the time of this writing, speculation from the FBI is that the hackers are associated with North Korea.

But I bet you’re wondering: is the movie any good? Is this movie worth all the furor?

Last Saturday, I was at a 24-hour movie festival in Austin, TX called The Butt-Numb-a-Thon. In a nutshell, we show up to the theater with no idea of what films will play. We could be seeing premieres, vintage movies, or, well, just about anything. And one of the things that scrolled in front of our eyes was The Interview.

This was two days before the terrorism threats hit the headlines. The screening I saw was feted with confetti cannons, a live appearance and Q&A by Seth Rogen and Evan Goldberg, and 20-foot-tall banners bearing Kim Jong-Un’s face. Everyone received rocket-shaped sippie cups bearing logos of the film. And, of course, we got the film itself.

The general plot, as I’m sure you’ve already heard, is this: Seth Rogen and James Franco play bumbling journalists who somehow score a Frost/Nixon-style interview with Kim Jong-Un. The US government intervenes and asks them to assassinate the North Korean leader. Of course, when they arrive in North Korea, wacky hijinks ensue.

I am generally lukewarm on Seth Rogen, mostly because his manchild schtick wears a little thin on me. I like the subjects he picks as targets for comedy, but the reality of his comedy rarely lives up to its promise. The Interview bears a lot of these same problems, but it succeeds more than most other Rogen vehicles I’ve seen.

Where The Interview truly wins is in its performances. The actors make this comedy 100% worth watching, even though not all the jokes land well. James Franco and Seth Rogen have amazing chemistry, and watching the two of them riff off each other is fantastic. But even better is Randall Park, who is hitting for the bleachers as Kim Jong-Un. Park takes over every scene, playing Kim Jong-Un as a sort of meek superfan of Franco’s character. (During the Q&A after the film, Rogen and Goldberg talked about how Park’s performance choices dramatically informed the plot of the film, to the point where the film’s best script choices were made because of him.)

Where The Interview stumbles is in the political commentary, which is puddle-deep and not really engaged with outside of the dialogue. It’s clear that the filmmakers didn’t really know what to do with the film once it arrives in North Korea, perhaps because the real North Korea is such an information vacuum. The film is better when it’s poking fun at American media and when it’s simply playing with its characters. This surely is no Great Dictator or Dr. Strangelove, but perhaps it wasn’t really meant to be.

Also, a lot of the comedy is really dumb. I mean, really really dumb. There are more butt jokes in this movie than there are turtlenecks in Love Actually. So many butt jokes. Anyway, dumb comedy is not my thing. If that’s your thing, The Interview would probably make you laugh more than it made me laugh, and you would laugh a lot.

So, given that the film is okay, is it worth fighting for?

Part of protecting freedom means protecting the stupid shit as well as the grand ideas. If Sony smothers the film entirely just so it can take the insurance money, I hope some office patriot leaks the film online.