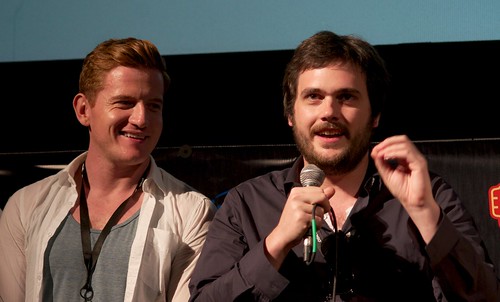 The sleep deprivation is starting to get to me. I hallucinated that Marko Zaror gave me an energy drink. And then he spin-kicked a can off Brian Salisbury’s head. And then I got into a conversation with his mother.

Oh, wait, there are photos of the spin-kick on my camera.

So, I guess yesterday really happened! Here are some reviews of what I apparently actually saw…

Confetti of the Mind is a delightful collection of Nacho Vigalondo’s short films, starting with the one that garnered an Oscar nomination. He’s a delightfully clever filmmaker, and the short format suits him well. The shorts are interspersed with short interviews with Nacho, who is full of funny stories and comments about each one.

Lost Soul is a documentary about the infamously troubled 1990s production of The Island of Dr. Moreau. (You know the one. The one where some poor CGI guy had to digitally remove Marlon Brando’s visible genitals from several scenes. Yeah, that one.) The filmmakers managed to get interviews with an astounding number of cast and crew members, given that many of them were originally under a gag order from the studios. The oral history of this disastrous movie shoot is extraordinary, sad, and often hilarious. Fascinating stuff.

I then got an opportunity to see the first half of the second season of Danger 5, which somehow has more dinosaurs, lasers, and Hitler than the previous season. Oh, and this season is set in the 1980s, so big hair, shoulder pads, and cocaine jokes run rampant. It’s hilarious, but at the end of three straight episodes, my brain felt a little broiled. It was super thrilling, though, that most of the cast and the director were all in attendance. I even got to talk special effects with David Russo, the director and the voice of Colonel Chestbridge. He told me to kill Hitler, and that pretty much made my day.

Tokyo Tribe is the latest film from Sion Sono, who is a filmmaker I dearly love. Tokyo Tribe is pure madness. It’s a Japanese gangland film that is also a rap opera. Yes. It’s a rap musical. And it’s a parody of rap culture in Japan. And it becomes increasingly insane as time goes on. I don’t love it as much as Sono’s previous film, Why Don’t You Play in Hell, but there are few films I love that much.

Redeemer is the new low-budget punchfest from Chilean director Ernesto Diaz Espinoza and his chiseled action-muse Marko Zaror. It’s a feast of lovingly-shot fight scenes, interspersed with a delightfully breezy villain performance by Noah Segan. Espinoza now lives in the space in my heart that was once inhabited by Robert Rodriguez.

Okay, now I need to put on pants and get to the theater. Maybe I can get Marko Zaror to kick a can off my head…