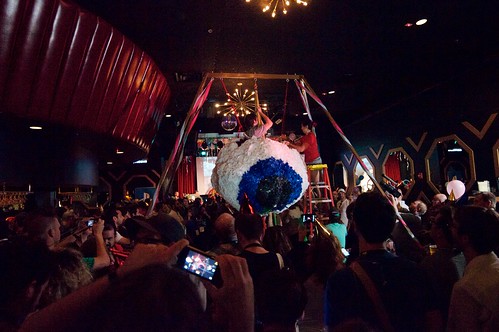 The normal description: Fantastic Fest is a film festival in Austin, Texas, which focuses on genre films from around the world.

My description: Fantastic Fest is the heavy metal mosh pit of film festivals. And I love it.

Opening night was last night. I got to see my favorite Fantastic Fest buddies. Beers were handed to me. The Texas swamp-heat made us all smell real pretty. I got to play a stand-up arcade game called The Last Starfighter. I got to see a human-filled eyeball piñata. The live band was made of furries. It all ended with a food fight on the top of a parking garage.

Oh, and I also saw a couple movies!

Tusk is Kevin Smith’s newest effort. It contains some of Smith’s trademark dialogue-heavy comedy, but mostly it’s a horror film (or, rather, an over-the-top parody thereof). It involves turning Justin Long into a walrus. No, really. The tone is inconsistent, and Smith doesn’t seem to know how to make it read evenly as a satire. However, the film contains a ludicrous Quebecois detective played by [unexpected cameo by a famous person you would not expect] and Michael Parks. I can always watch Michael Parks.

In better news, there is this Indian film named As Seen by the Rest, which I thoroughly enjoyed. It follows the Citizen Kane structure where there is an end point that you are not told, and as a journalist interviews various people to get at the story, you are shown out-of-order facets of the truth. It’s also a little bit of Rashomon and a whole lot of Pulp Fiction, to the point where the film shares a MacGuffin with Tarantino. As a whole, the film could use another pass in the editing room, but otherwise I was pleased that Fantastic Fest poured it into my eyeballs.

Now, I need to go wash the fest funk off my body so I can go join humanity. I am aiming for five films today!