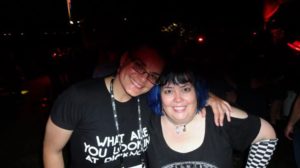 I don’t remember when I first met Holly. She just always seemed to be part and parcel of the Butt-Numb-a-Thon experience. Every year, when I’d go down to Austin, TX, chances were pretty good that Holly was also there, having traveled from Atlanta. Holly was always a burst of energy. She’d instantly befriend the new folks. She’d remember you even if she’d only met you briefly years ago. She’d wrap you up in a hug when you arrived, and she’d hug the hell out of you when you left.

I remember one Fantastic Fest where I had just seen a film named Love, which was set on the International Space Station. The screening was followed by a Q&A with the filmmakers, led by none other than video game designer/astronaut Richard Garriott. I sat through most of the Q&A baffled by the fact that I was in the same room with Lord British from Ultima, and that Lord British had lived in space.

After the Q&A, the audience got up and started to leave the room. I saw Holly near the front of the theater, so I walked up to say hi. She was chatting with some other folks, but when I arrived she said, “Oh, I want you to meet someone!”

I was then led by the hand to up to Richard Garriott, who’d she’d just met and of course immediately befriended.

“Richard! This is my friend, Melissa! She’s an amazing person, and you two should know each other.”

Dumbfounded, I shook the hand of Lord British. The part of my brain that still functioned had an internal dialogue that went something like Holly what the fuck why are you talking me up as awesome to somebody who has LIVED IN OUTER SPACE?

But Richard was totally cool. By the time five minutes had passed, I had learned a lot about how people poop in space, all because Holly talked me up to Lord British.

Holly loved people. She was a main driving force of the BNAT Facebook group. She would welcome the new folks. She kept the fires of discussion stoked during the year. She was one of the reasons that the BNAT family of attendees really is like a family. She was like that one fun, wild aunt who would always keep the conversation going at Thanksgiving.

I don’t think I’ve ever heard her say anything mean about another human being. 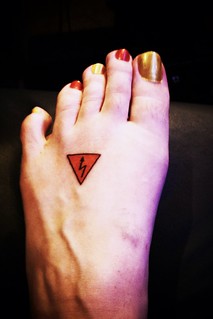 Last year, at the closing party of Fantastic Fest, I was one of the lucky folks on the short list to get a free tattoo. It was a long wait, but Holly would drop by every now and then to make sure I wasn’t dying of boredom. I think she even brought me a beer at one point.

When I was called up by the tattoo artist, Holly was there like a shot. See, I’d chosen the top of my foot as an excellent place for this tattoo. I’ve gotten tattoos before, so I knew what to expect, but I knew that running a tattoo gun over the tiny bones of the foot would hurt like the dickens. I was prepared to grit my teeth on my own, but Holly would hear none of that. She was determined to keep me distracted while I got jabbed thousands of times by an inky needle.

So, all during the procedure, Holly held my hand and told me stories about when she worked as an abortion clinic escort. They were a mix of serious and funny stories, told with the pace and speed of a machine gun. She just talked nonstop until the tattoo artist was done.

At the end of it, I knew she must have been an amazing clinic escort.

Just before BNAT last year (if I remember right), Holly announced that she had been diagnosed with breast cancer.

Throughout the last year, she has been a paragon of positivity and good humor. She’d make Hulk jokes about the radiation treatment. She was very open about posting photos of her various operations and treatments, and yet she always found something light to say about the damage her body was taking.

She made it to Fantastic Fest this year, which means she was deemed healthy enough to travel. I took it as a good sign, especially since whenever I saw her flit by, she looked great. She had a radiation burn across her upper chest, and her build had changed since the last time I’d seen her, but otherwise, she looked great. Even her super-short cancer recovery haircut looked great on her.

She was maybe a touch less full of energy than usual, but the difference was slight. It honestly looked like she punched cancer right in its goddamned face.

The last time I saw her at Fantastic Fest was at the final party. She was waiting to get one of the free tattoos. As she sat in line, everyone was dropping by to say how great it was to see her. A common refrain was Goodbye, see you at BNAT!

I unfortunately had to drive other folks home early, so I was unable to wait very long with her. I did get to have a nice, long goodbye, and got a hug, as always.

I was sure I was going to see her at BNAT this year, because Holly is always at BNAT.

After she got home from Fantastic Fest a couple weeks ago, she learned that the cancer had metastasized. She was riddled with the stuff.

She was effervescent. She was an unstoppable dynamo of activity, a fun-seeking missile, a maelstrom of energy. It’s hard to believe that her own body betrayed her. That there will be no more Holly.

And as I pen this, I realize that I am doing this all wrong. Holly had it right. Holly was in the moment with everyone she came into contact with. You felt appreciated and welcomed at all times. Meanwhile, here I am, expressing gratitudes into a machine after the person who should be thanked and praised can no longer hear them.

Oh, Holly. I thought there was more time. I was certain there would be more movies and karaoke and free tattoos.

May we all live with your zeal.