It took me a while to recover from Fantastic Fest, which is why my post about the final day comes to the Internet more than a week later. The final party was a lot of everything (including a booze luge, slap shots, a water balloon slingshot, real free tattoos, and a live donkey), and it was followed the next day by a 18-hour drive across the country to get back home. Then I went back to work. So, I was a little tired this week.

Anyway, I did see three additional movies prior to the onslaught…

Future Shock! The Story of 2000AD is a fairly straightforward documentary about the British comics company that brought us characters like Judge Dredd and a whole slew of British comics talent. The film does a nice job bringing context to the tone of 2000AD comic books, and brings some nice visual flair by animating some of the comic art. Also, comics fans will see a lot of familiar faces being interviewed — Neil Gaiman, Brian Bolland, etc. (No Alan Moore, but nobody gets Alan Moore.)

Alleluia is a Belgian horror film that I ultimately did not care for. The film has a strong concept: a woman is urged by a friend to try a dating site, and meets a man who turns out to be a small-time crook, who manipulates women into giving him money. This woman is taken in by his ruse, but has fallen in love with him, so she meets him again and says she will help him con other women, as long as she can stay with him. The two then begin conning other women into giving money to this guy… but the problem is that the main lady gets jealous and starts murdering their marks. So, that’s pretty interesting. The problem is, I never truly got what was driving the characters, and I eventually just didn’t give a damn about what was going on.

And, finally… Jerry and I stepped up and braved the 5-1/2 hour directors’ cut of Lars von Trier’s Nymphomaniac. I’d endured Antichrist just a few weeks prior, so my choice to go into that theater was driven more of an “I’ll take that dare” mentality rather than a “I want to see that movie” mentality. That said… I liked Nymphomaniac more than I thought I would. I don’t think I’d say I enjoyed it, because I don’t think Nymphomanic is really a movie you enjoy. I did find the film to be consistently interesting, though, and I’ll admit that it is the movie that I’ve thought about most since the festival ended. The movie is a bit of a mess; it’s all over the place in terms of focus and idealism, and it seems that von Trier’s brain spilled out every random thought he has about everything onto the screen. It almost plays out like a series of short films. Some work, some don’t. Most of the stuff that works is in the first half, where the film seems to have a sense of humor about itself.

The film does have two scenes that are marvelous, one in the first half and one in the second. Both involve actors that appear nowhere else in the film. The first involves Uma Thurman as a scorned wife, and the second involves Jamie Bell as a professional sadist. Both actors are magic in these scenes.

Oh, and if you’re thinking of watching Nymphomaniac just because of the hardcore sex scenes, you’re probably not going to get what you expect. Yes, the sex is explicit, but it is mostly depicted as awkward or uncomfortable in some way. This is a pretty unerotic film, even if it is all about sexuality. One of the scenes even gives Antichrist a run for its money in terms of brutality.

Honestly, the best part of Nymphomaniac was enduring it with a friend, because we wound up killing three vats of popcorn and twelve bottles of beer during our rollercoaster ride. Our stomachs hated us later, but we soldiered through, and we are proud. 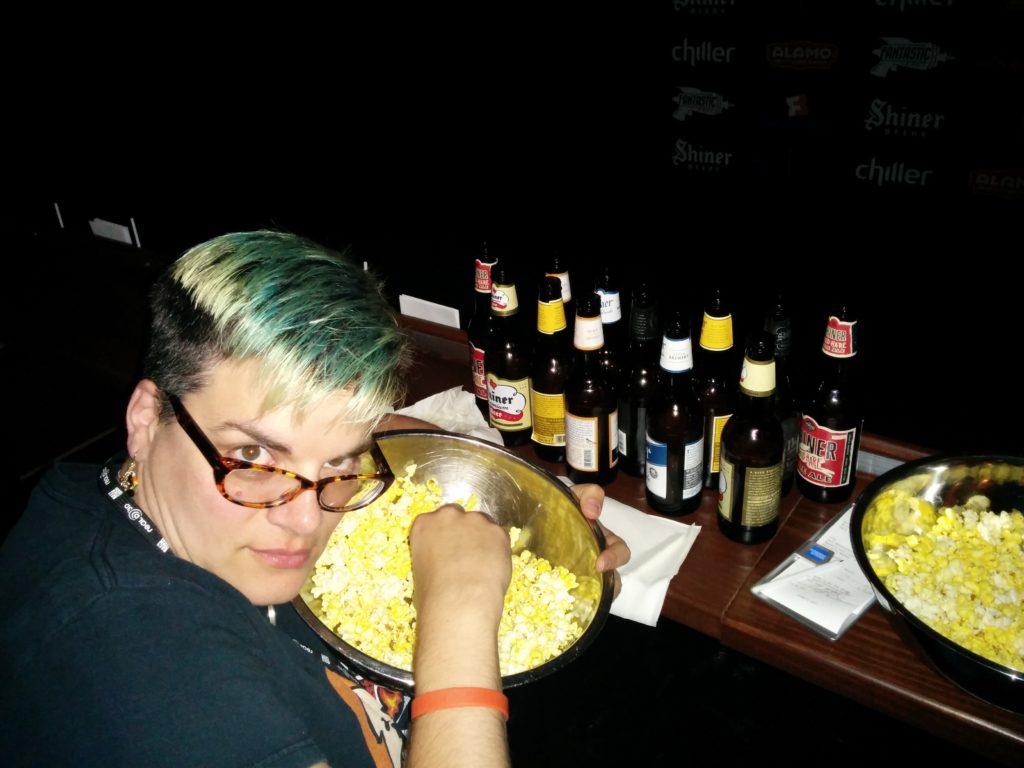 Nymphomaniac didn’t have a happy ending. 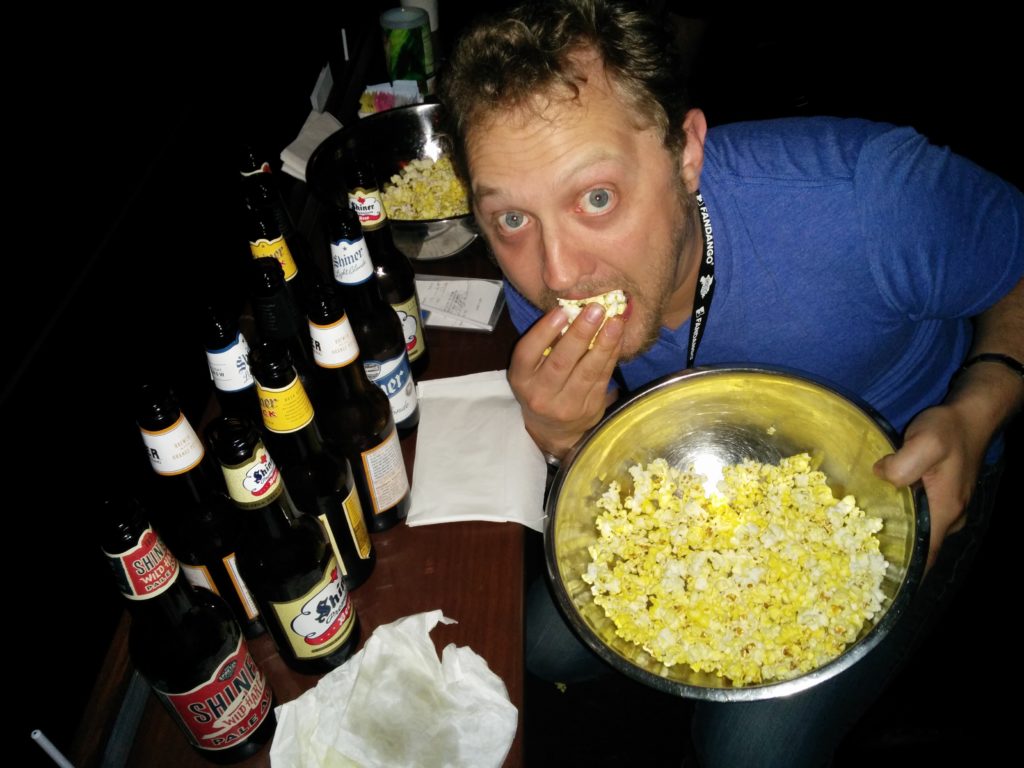 Jerry, post-Nymphomaniac. By the way, the Alamo Drafthouse has great popocorn.