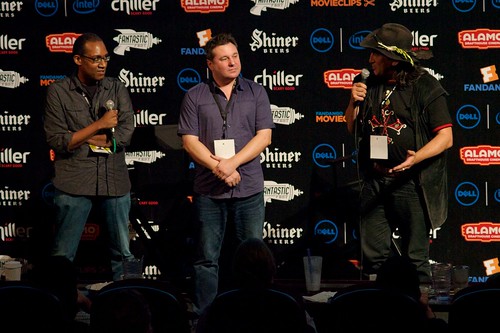 I was so exhausted yesterday that by the time I drove to the theater, I realized I just couldn’t handle another movie. So I skipped the first film and slept in my car for two hours. When I woke up, I checked Twitter and saw the buzz on the film and realized I’d made the right choice.

The films I did see yesterday were half old and half new. Thanks to the festival’s premier of Electric Boogaloo: The Wild, Untold Story of Cannon Films, the festival had also gotten hold of some 35mm prints of some of the craziest examples of Cannon’s oeuvre. So, I happily spent the first half of my day watching those.

Cannon’s insane Death Wish 3 screened from an absolutely pristine 35mm print, which was struck a few years ago by MGM. That means I may have seen a better copy of the film than most audiences who have ever seen it. That’s a bit strange, because Death Wish 3 can only be described as “it’s not good, but it’s awesome.” It’s one of the pinnacle achievements of ludicrous 1980s violence, where Charles Bronson walks around with a hand cannon, blowing away thousands of anonymous thugs. Also, the movie seems to have something against ice cream. And there’s a bad guy with a reverse mohawk, which makes me wonder if the filmmakers had ever seen a real street thug or if they were just making shit up as they went along. Did I mention that the apartment building filled with gentle, elderly neighbors also happens to harbor two Browning M1919 machine guns? Yup.

This screening could only be followed up by Cannon’s equally insane Ninja III: The Domination, in which an aerobic’s instructor (!) is possessed (!!) by the soul of an evil ninja (!!!). The film’s script reads like a checklist of what the filmmakers thought was the cultural touchstones of 1984 American culture: legwarmers, Jazzercise, ninjas, lasers, V8 juice, and big hair (both on the lead actress’ head and on the lead actor’s back). Ninja III is exquisite in its inexplicability. Why does the lead character have a pay phone inside her apartment? Why is there a scene with a possessed arcade game? Oh, and did I mention that the V8 juice appears as a sex aid?

I then left the grand madness of the Cannon Films archive to watch something new: The Guest, the latest film from the writer and director who brought us You’re Next. The plot starts with an American soldier, who shows up on the doorstep of the family who lost their son to battle. He soon ingratiates himself into their lives, but something is… off. The film contains the lively characters, wry humor, and great tension seen in You’re Next, and adds a magnetic performance by Downton Abbey‘s Dan Stevens. Also, while the film doesn’t directly reference the 1980s, it has that same verve. It opens in limited release this week, so I recommend getting to a theater to catch it.

(After the film, I met Simon Barrett, who wrote the film. I told him how much I loved You’re Next and how much I liked how he wrote female characters. We got into a great conversation about the dearth of good female characters in genre films, and about how it’s slowly getting better. He said he wrote You’re Next after seeing a string of films at Fantastic Fest 2010 where women were all treated horribly.)

I capped the night with a New Zealand film called Housebound, and it immediately became one of my favorites of this whole festival. Great horror-comedy is hard to come by, and this one hits the sweet spot. The plot revolves around a young female hoodlum, who is confined by an ankle bracelet to her overbearing mother’s giant rural house. The mother believes the house has been haunted since before she moved in 20 years prior; the daughter doesn’t quite buy that, but can’t explain the house’s weird noises. The neighborhood parole officer happens to be into paranormal investigation… and the story goes from there. The film goes to places you don’t expect, the characters are vivid, and the script has a lot of pop to it. The film is a hoot, and I look forward to showing it to friends back home.