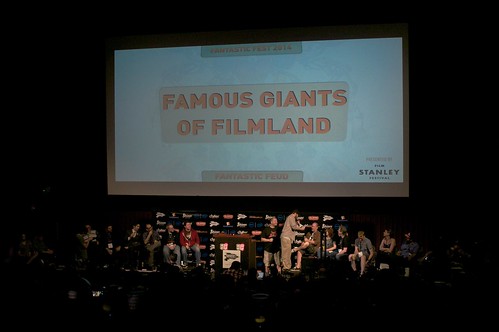 I don’t really know what day it is anymore. The concept of time is foggy. My body shuffles forward, as if pulled by an external force. My eyes scan constantly, seeking any movie screen within their view, like junkies seeking their next fix.

Anyway, I spent much of yesterday in front of things that weren’t feature films. I sat through the festival’s slate of horror shorts, and then witnessed the barely-controlled juggernaut of chaos that is a live game show named Fantastic Feud. As a result, I got five hours of sleep instead of the usual Fantastic Fest Four.

Anyway, I did see some good feature-length stuff yesterday!

Force Majeure is the story of a Swedish family, who travel to the French Alps for a ski vacation. While dining at an outdoor restaurant, an avalanche skids down the mountain and hits the building. When the snow-fog clears and it is evident that no damage happened, the mother learns that the father ran for his life, abandoning her and the kids. This causes the rest of the vacation to be very uncomfortable for all involved. Force Majeure is a quiet, dryly humorous examination of masculinity and family, and definitely worth a look.

The Babadook is a striking horror movie, wrapped around the story of a single mother and her difficult seven-year-old son. The child becomes convinced that a boogeyman is lurking in their home, to the point where his constant obsession and weapons-crafting gets him thrown out of school and his mother out of her tiny social circle. Eventually, it’s just the two of them in their house together, and the seams of their existence start to unravel. Is the boy a monster, is the mother a monster, or is there a third monster-monster? The movie is excellent right up to the ending, which seems to be the correct ending for the story buried underneath an incorrect tone. It’s too bad, because the entire film is an intense fictional examination of the experience of living with mental illness, coupled with astonishing performances from the two leads.

The third and final film I saw yesterday was Free Fall, a Hungarian film that is more of a string of surreal vignettes than a straight narrative. The film starts out with an elderly woman leaping off the top of her seven-story apartment building, only to unceremoniously strike the pavement below. (Don’t worry, she’s fine. She does this every night.) The film then proceeds to tell the story happening within the apartments she passed on the way down. This includes things like a dinner party with the occasional nude person, a yoga class for what seems to be X-Men, a lot of Saran Wrap, a kid with a cow problem… well, it’s hard to explain. Whatever is going on here, it’s beautifully filmed, often funny, and never boring. The film also yielded the single most Fantastic Fest-y scene I’ve witnessed yet this year. When it happened, I could not stop giggling at the audience reaction. It was glorious.