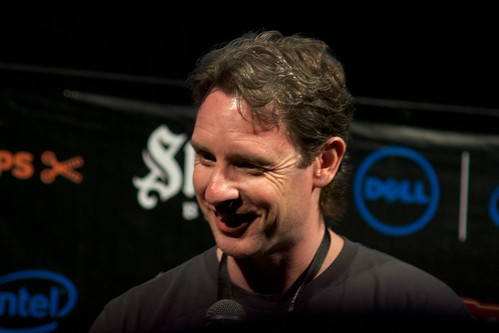 Mark Hartley at the Q&A for Electric Boogaloo: The Wild, Untold Story of Cannon Films

After only two days of Fantastic Fest, I feel like the event has eaten my face and left me in an exhausted heap. This, of course, is how it should be.

This year, Fantastic Fest moved back to the Alamo Drafthouse South Lamar, which is within sight of the Austin downtown skyline. While it’s good to be back at our old stomping grounds, the theater has been dramatically remodeled, as has the area around it. In the Olden Days, filmgoers could hang out in the parking lot, in the lobby, or under a tented area with tables, or in the Highball a few doors down. Now the Highball is next door and a fraction of its former size; there is no parking lot or tents or outdoor tables, and the lobby feels very compressed. Add to that this year’s extra-humid Texas weather, and we have a recipe for some dense, grumpy crowds.

Still, this is only a minor twinge. It’s great to see everyone, and once you’re inside a theater, the Fantastic Fest experience is what it has always been: awesome.

So, I saw some movies yesterday…

The Tale of Princess Kaguya is Studio Ghibli’s latest offering, a Japanese folk tale told in achingly beautiful pencil-and-watercolor art. It is the story of an elderly couple who find a baby inside a bamboo shoot, and who raise her as their own. The father is convinced the gods are telling him to make her into a princess, so after he finds gold and fine silks in the woods, he sets out to build her a palace. The girl, who delights in being around nature, is suddenly caged within Japanese society. The film is beautiful, magical, joyful, and, ultimately, heartbreaking. Studio Ghibli are masters at turning film audience emotions into putty, and this film is no exception.

Electric Boogaloo: The Wild Untold Story of Cannon Films is a documentary that I’ve been waiting three years for. Mark Hartley, the same documentarian who gave us Not Quite Hollywood and Machete Maidens Unleashed, interviewed what seems to be like every single person who ever worked with Cannon Film, and the result is a film that is both a celebration and a critique. If you see it, Electric Boogaloo will make you want to dig up Cannon’s delightful gonzo filmography and roll in it like a dog in stink.

Over Your Dead Body is Takashi Miike’s latest film, and… oy gevalt. If you’ve ever seen Audition, you’ll know about what you’re getting into here. Over Your Dead Body tells the story of a theatrical cast who are putting on a production of Yotsuya Kaidan, a traditional kabuki play that involves samurai and murder. As the plot moves along, the lives of the actors start to overlay with the plot of the play. The result is nightmarish. (When a woman in a Miike movie starts sterilizing metal instruments, you know your metaphorical rollercoaster car is teetering at the top of the first hill.) The film is also gorgeous to behold, as a triumph of cinematography and art design. While Miike’s films aren’t always easy to watch, they are masterful in execution; this one is no exception.

John Wick is the latest action flick offering from Keanu Reeves. Since the film was directed by Chad Staheiski, a first-time director who was formerly a stunt man, I wasn’t expecting much, but oh man… what fun! The film is borderline cheesy, but it knows what it is and it revels in it. Between bullet ballets, John Wick is loaded with fun character actors doing fun character actor things (alert: Ian McShane content!). And when the action kicks in… wow. The stunt work is meticulous, and it is filmed with great confidence. I was surprised and delighted.

Wyrmwood is a zombie flick from Australia, crafted by a whole team of amateur filmmakers who filmed for four years and funded everything themselves. Judged in a vacuum, Wyrmwood feels like it didn’t give me anything I hadn’t seen before until halfway through, after the time I’d tuned out. However, this film is mighty impressive considering its source: the storytelling is competent, the action is brisk, and it looks like everyone is having one hell of a good time making this thing happen. Also, about ten people who worked on the movie are there at the festival, and they look to be having the time of their lives. So, Wyrmwood gives me warm fuzzies, even though the film itself never truly sold me.

Okay, I’m off to participate in a pie fight!