Home Life Tales from the Workplace: Found in Translation

Tales from the Workplace: Found in Translation

In one of my previous Tales from the Workplace tales, I mentioned that I once worked at the Minnesota Renaissance Festival. I would strap myself into an expensive costume and use a bad English accent to sell things to dusty Minnesotans who had drunk too much.

This tale predates the previous tale. I was around 16 years old, and this was my second year working for the Festival. My similarly aged friend Julie and I were stationed in a food booth that sold Sysco versions of “Chinese” food: chow mein, cream cheese wantons, etc. It was unthrilling fair food, but hey, we were being paid to dress up and talk silly and sling rice around. It wasn’t a bad life.

The booth’s storefront was rather elaborate, compared to most of the shacks around us. It was painted bright yellow and red. Huge dragons, carved in wood, graced the front of the booth, curling around the service window. Painted down each side of the booth were huge red hanzi, and nobody really knew what they said.

One day, one of the festival’s performers — a juggler, I think — walked past the booth while Julie and I were just standing around, waiting for customers. He stood for a moment in front of the shop, looking at the decor.

He pointed at the hanzi to our left. “That says, ‘The King’s Restaurant.'” 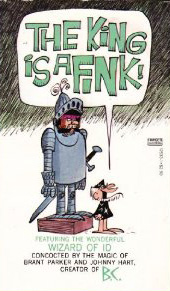 Then he pointed to the hanzi on our right. “But that side says, ‘The King is a fink.’”

There was something about his tone that suggested he was joking, so we laughed and nodded. I was momentarily curious how someone could make such a specific Wizard of Id joke in hanzi.

The juggler went on his merry way.

Flash forward a few weeks. It was another day where we didn’t have many customers, so Julie and I were again hanging out in the front of the shop, not doing much.

On that day, a festival patron was walking past the shop. He was an older gentleman, clearly of Asian descent. I learned later that he was a professor who taught Chinese at the University of Minnesota.

He glanced at our restaurant, and then burst out into laughter. After he caught his breath, he pointed at the shop wall to our right.

In a thick Chinese accent, he said, “That says, “The King is a fink!'”

I was at that shop for only one season, but of all the thousands and thousands of people who passed by the shop while I was there, those were the only two people I saw who caught that one of the Festival painters was a smartass.