Home Life Ebertfest: In the Family

Ebertfest: In the Family 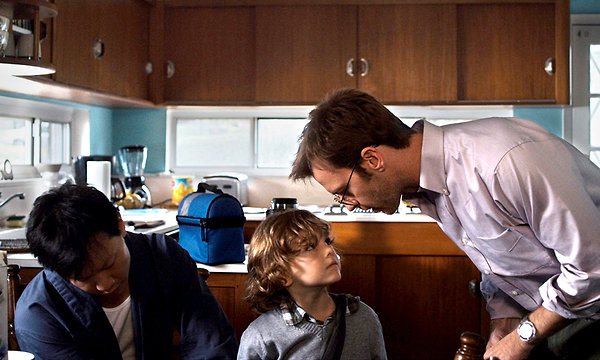 If devouring an obscene amount of movies in my daily life has taught me anything, it’s the fact that there is no such thing as a film that appeals to everyone. Every great classic has at least one hater. The trick is whether the hater can reasonably articulate their dislike, rather than just dismissing the film outright.

I’m sad to say that I’m probably In the Family‘s lone “hater”.

I’m not sad to say that because I feel I’m incorrectly alone on this. I’m sad because I clearly didn’t get the buoyant joy from seeing a great film, which apparently everyone else in the audience got. It’s much more fun to enjoy a film than it is to sit in a theater and pick it apart.

I’m also sad because even I can clearly see that In the Family is an earnest, original film that is clearly very well made. This is a bold film with good in its heart. Every single other person I talked to at Ebertfest named In the Family as their favorite film at the festival. It was my least favorite.

So I guess my trick will be to find a good reason for being the lone dissident.

(Before I proceed, I should clarify: I don’t hate this movie. I found it flawed, and I’m comparing it to a lineup where all other films I saw were extraordinary. The bar is high at Ebertfest.)

In the Family is the 2011 directorial debut of Patrick Wang, who also wrote, produced, and starred in the film. The film centers around a family structure that is drawing heated debate these days: a young boy being raised by two gay men. Since the story takes place in Tennessee, the two fathers aren’t married, which means that the plot is set in motion by the problems that occur when one of the men, the boy’s biological father, dies suddenly. The living partner (played by Wang) suddenly finds himself without claim to the boy he calls his son.

After seeing the film, I called it “Ozu with gay people” because Wang’s film seems to take a lot of lessons from Yasojiro Ozu, who made Japanese family dramas during the 1940s and 1950s. Scenes in an Ozu film, and in In the Family, happen in a slow, naturalistic way. The scene usually starts when a character enters the room, and it ends when they leave. What happens in between may or may not be entirely relevant to the story. Much is said in subtext. Personally, I find Ozu films more of a challenge than a pleasure. However, Wang, to his credit, seems to capture the good things about working in an Ozu style without getting bogged down.

I also give credit to Wang as a performer. The whole film orbits around his character, and the movie would collapse if Wang wasn’t a good actor. The character he plays is quite fascinating, too: a gay Asian-American home construction guru with a deep Tennessee drawl. The film is worth watching just to see this character in action.

But here’s the thing, the thing that sucked me out of the movie more than anything:

Those of you who don’t read fan fiction are scratching your heads, so let me elaborate: a “Mary Sue” is a character in fiction that is a thinly-veiled idealized version of the author. Mary Sue characters tend to be a sort of wish-fulfillment, wherein the author essentially makes themself perfect (beautiful, intelligent, wise, well-liked, etc.); if the character is flawed at all, the flaw is endearing.

I missed the Q&A after the screening, so I don’t know much at all about Patrick Wang (except he doesn’t have a Southern drawl in real life), but the fact that the same guy produced, wrote, directed, and starred in the film adds to the sense that this could be a Mary Sue situation. I have no idea if this is actually the case, but the suspicion was enough to take me out of the film.

The film could also benefit by trimming about 30 minutes of its runtime. There are a couple of scenes that don’t seem to contribute anything at all. They’re watchable scenes, but they’re extraneous.

Do I recommend it as a film to watch? Yes, I do. This is a smart and heartfelt film. If you’re hyper-tuned to writing tropes, though, your Spidey-sense might get triggered.

(P.S. — Wouldn’t it be nice to see a movie that centered around a gay couple, and the main drama of the film had nothing to do with the fact that they were gay? Perhaps someday…)