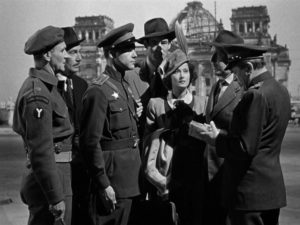 The cast of Berlin Express, seen in front of the real rubble of post-WWII Germany.

The year was 1948. World War II had just closed, and the difficult job of cleaning up Germany was in progress. Over the rubble, the Allied powers collaborated, clashed, and ultimately sliced Germany into bits.

This is the backdrop of a very strange film noir named Berlin Express.

Berlin Express was the first Hollywood production filmed in Germany after WWII, and the film makes everything it can out of showing the real detritus of the war. Characters totter around in what seems an endless landscape of rubble. The film production went out of its way to grab as much documentary footage of blasted-out Berlin and Frankfurt as possible, and for that alone, this film is worth watching. The devastation, even three years after Germany’s surrender, is unearthly.

Yet the film has more to it than just its backdrop. Berlin Express is a tale of international intrigue, which strives to embody each of the Allied powers in an ensemble cast. There is a German doctor who is working to hash out peace in his country; there is his wary secretary of indeterminate European origin, who is scrambling to keep him safe; there is a Russian soldier who is suspicious of everyone; there is an American nutritionist, working to devise rations that will nourish the starving German population; there’s a British teacher; and there’s a French official. Everyone gets mashed together on a train headed to Berlin. When a bomb explodes on the train and kills the German, the mystery is afoot.

What follows is a complex web of intrigue. Some of it feels like it is taken verbatim out of the film noir handbook, and some scenes feel clumsy, but overall, Berlin Express is a complex and fascinating film to watch. This is a film that is unafraid to make the viewer work to keep up. Characters rattle off lines in untranslated French, German, and Russian, and though you don’t necessarily need to know what exactly they are saying, it is very important to pay attention. (The introduction of the secretary character involves her rebuffing strange men in a variety of languages.) The film introduces and establish characters in the blink of an eye. The film, made in 1948, also assumes a fairly high baseline of knowledge about WWII history, so you might want to refresh your memory about German reconstruction before going in.

But if that sounds like work, it’s worth it. Berlin Express was directed by Jacques Tourneur (of Out of the Past and Cat People fame), which means it goes full tilt film noir. Characters who are not what they first seem? Check. Shoot-outs in dramatically lit set-pieces? Check. Creepy-ass clowns? WHOA. 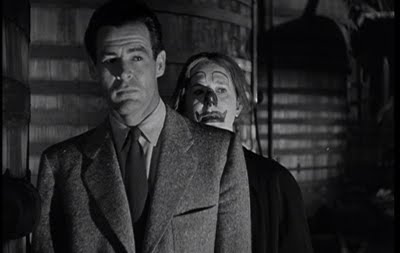 Berlin Express gets bonus film noir points for starring Robert Ryan, who you probably know from extraordinarily macho films like The Dirty Dozen and The Wild Bunch.

Berlin Express was completely unavailable on home video for many years, but you can now enjoy it through Vudu and the Warner Archives.