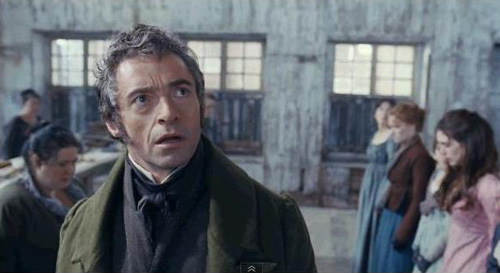 Before you ask: no, this wasn’t the secret film at the Butt-Numb-a-Thon this year. I just was lucky enough to be in the room with an Oscar screener during my recent travels.

The gigantic Victor Hugo book Les Miserables has had a long history of adaptation. Aside from the massively popular musical/opera that has been filling theaters since 1980, a film adaptation seems to crop up every couple of decades or so. This time, the musical itself has been turned into a film, which should be hitting theaters a week from now, on Christmas Day.

The opera, like the book, is a daunting project to adapt. The theater spectacle is a massive endeavor involving a large ensemble cast, 50 songs, a rotating stage, and something like 4 hours of runtime. The storyline covers several decades of French history. Performers are required to have tremendous talent both as actors and as vocalists.

The new film steps up to the challenge quite admirably. Bucking the recent cinematic musical trend of casting actors regardless of their singing ability (see — or rather, don’t see — the atrocious Joel Schumacher Phantom of the Opera), the cast of Les Miserables is stocked almost entirely with people who have theatrical musical training. Hugh Jackman leads the cast as Jean Valjean, Anne Hathaway appears as Fantine, and most of the rest of the cast are folks that only theater nerds would know. The result is that almost the entire cast can not just sing, but can sing at the level required for full-blown opera. (I’ll get to the one glaring exception a bit later.)

Beyond this, director Tom Hooper has taken the interesting tactic of actually recording all the vocals live on set, which is wildly different from every other movie musical ever filmed. The songs performed in this film aren’t recorded in a studio and lip synched later. These are the actors actually performing straight to the camera, often in a single long take. The technique gives the music itself an intense, intimate drama that fans of the theater show have never seen before… and something nobody has really seen in cinema before, either. Sometimes, the music winds up being dramatized almost beyond recognition, but mostly it is at least a noble experiment, and, in the best moments, is something truly revolutionary.

The very best moments of the film almost entirely involve Anne Hathaway, who uses the live recording technique to its absolute fullest. Her performance is stunning, the sort of swinging-for-the-bleachers performance that transcends the screen, captivates audiences, and makes awards fall out of the sky.

Hugh Jackman is no slouch, either. He is a great singer, honed for decades by musical theater, and makes a very good Jean Valjean. I’ll admit his performance took me by surprise.

The rest of the cast is also very good on the vocalist front, quite up to the standards of Broadway, EXCEPT (…drumroll, please) Russell Crowe. Oh, man, Russell Crowe. Mr. Crowe is horribly miscast as Javert, as he clearly hasn’t had the level of vocal training as everyone else. He can sing on key, but he doesn’t have the breath support or the range to produce any sort of performance in the role of Javert. Mostly, he seems to just be struggling to get through the songs without blowing a note. Those of you who are familiar with the book or the musical will know that Javert is one of the most compelling roles in the entire piece, and will weep at the fact that this opportunity was utterly blown. What makes this movie doubly sad is that Russell Crowe could probably be an excellent Javert in a non-musical adaptation of Les Miserables. What a waste.

Another beef I have with the film is that the cinematography sometimes feels clumsy. The film often stops dead during the showpiece songs, while the camera runs for a single take while one actor belts out an entire song… and the camera doesn’t really know what to do. Sometimes, it’s just a locked-off shot of the actor’s face in close-up. Sometimes, the camera just wanders aimlessly around the actor’s close-up face. Sometimes shots are weirdly framed. Mostly, though, the film is a sort of love-letter to sepia tones.

There are other nits I can pick, too. Some of the music is edited slightly (mostly, just a line here and a line there); mostly it works, sometimes it doesn’t, and sometimes it’s baffling. Helena Bonham Carter and Sacha Baron Cohen, cast as the Thenardiers, have the life sucked out of them by listlessly realized scenes. There are some weird staging choices.

But mostly, the film works in its 157-minute-long glory. Placing the a camera in the streets of Paris gives scale to the action that isn’t granted by the stage production. If you’re a fan of the musical already, there’s a lot to enjoy here.