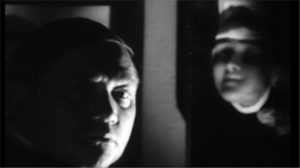 A few nights ago, I saw that The Cremator (1969) had popped up on Hulu Plus’ streaming service, under the Criterion label. I knew little about the film, aside from the fact that it was one of only 6 films on IMDB’s Top 50 Horror Films list that I’d never seen. So I watched it.

I was almost immediately struck by the sense that, if it were in English instead of Czech, Stanley Kubrick might have directed the film. Cinematographer Stanislav Milota makes liberal use of non-standard lenses, particularly fish-eyes and other wide angles, to set a sense of unease. Like a Kubrick film, The Cremator almost looks more like a moving album cover instead of a film. Aside from that, the subject matter, focusing tightly upon a crematorium operator who descends into sociopathy, is also quite Kubrickian. Open that with a striking papercraft-animated opening credit sequence, and add a dollop of some of the blackest comedy I’ve ever seen, and you have something that almost looks like a black-and-white mash-up of The Shining and Dr. Strangelove.

To say The Cremator is a horror film may put some viewers on the wrong track. It is the definition of a slow burn, where you feel uneasy — but you don’t know quite why — for about 3/4ths of the running time. It’s the little details that are unsettling, and you might miss them if you aren’t paying attention. Kopfrkingl, the main character, becomes creepy through the minutest of gestures. He touches the back of the neck of a new employee. In his morgue, he touches up the hairdo of a corpse like the meticulous attendant he is… and then uses the same comb on his own hair. He launches into long monologues, which mostly make sense… mostly.

When the film has patiently developed its central character, it lets a whole new aspect of the story bloom out of seemingly nowhere, yet, of course, it was lurking in the corner the whole time. This film rewards patience.

Rudolf Hrusínský, who pays Kopfrkingl, is perfect in the main role. He fills the screen with his presence. He is the engine that runs the entire film.

According to Wikipedia, “the film was banned after its premiere in 1969, and remained in the vault until the collapse of the communist system in Czechoslovakia in 1989.” Thus, even though the film earned acclaim in Czechoslovakia upon its release, it was largely forgotten for many decades. I am thankful that the digital age has now made such a strange cinematic treat available once again.