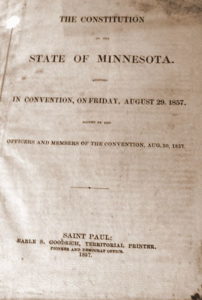 Image from the Wikimedia Commons

Today, the citizenry of Minnesota will choose whether to adopt two proposed amendments into the Minnesota constitution. The first amendment would limit marriage to a union between one man and one woman. The second would invoke Voter ID practices.

I won’t get into gay rights or whether voter ID disenfranchises large portions of the electorate. Even outside those sizeable issues, both of those amendments should be kept out of the constitution. Here’s why: neither amendment has any business being in a constitution.

(If there’s anyone out there that thinks gay people shouldn’t have the same rights as straight people, I simply say this: the rights of my fist stop at your face, and vice versa. Religion cannot be used to limit the rights of people who don’t subscribe to that religion. The minute our society assigns civil and monetary benefits to being married, like tax exemptions, and yet denies marriage to certain consenting adults, that becomes discrimination at a civil level. End of line.)

Now, regarding the Voter ID amendment, the amendment simply poorly designed. The amendment itself does not specify all of the operational details. That will be figured out by legislators after the vote. In essence, voters are being asked to vote on a blank slate. Nobody knows how the Voter ID procedures would be paid for, or how much it would cost, or what IDs would be included as valid, because nobody has gotten that far yet. This means that, if this amendment gets voted in, the details of it will sway with the wind depending on who’s controlling the legislature. Granted, the small details need to be malleable in order to be adaptable over time, but this thing is so vague that even Voter ID proponents should vote against it.

I personally think both amendments are terrible for other reasons, but I think this is the sort of ground that both liberals and conservatives can meet upon. If you are a Minnesota voter, please vote no on both amendments.

Edited November 11, 2012 to add: I am pleased to report that both amendments were soundly trounced yesterday. I am proud of my home state.